Talking to my PS5 works better than I expected

Sony’s latest PS5 beta, which began rolling out Wednesday, adds support for a new “Hey PlayStation!” voice command you can use to open games, apps, and settings and control movies and songs. I’ve been able to test the new feature, and to my surprise, it actually works quite well, and I could see it being a genuinely useful way to navigate the console’s UI.

One thing I was happy to see was that the voice command feature was opt-in — if that holds once the software update is released widely, that means you’ll have to actively choose if you want your PS5 to be listening to your voice. After I installed the beta, I had to dig into the PS5’s settings to a new “Voice Command (Preview)” section to turn it on.

When you do, your PS5 will show you instructions on how to prompt the voice command feature — just say “Hey PlayStation” (after making sure your mic isn’t muted and that your console is connected to the internet). The instructions also include a list of some things you can ask your PlayStation to do, like open a specific game or pause music.

Here are some of voice commands available.

Once the feature is on, when you say “Hey PlayStation,” a pulsating white dot will appear in the top left corner of your screen. When you say your command, it’ll appear as text next to the dot. In my testing, if the console understood my command, such as “go to the main menu” or “open Fortnite,” it would then do the thing.

When I would make a more vague statement, such as just the word “Persona,” my PS5 instead shows games it thinks are in realm of what I’m looking for. If it found just one option, I could say “yes” or “no” to opening it. If it found a few, it presented them as a numbered list, and I could say the number to go to that thing or “see more” to view a page of search results. 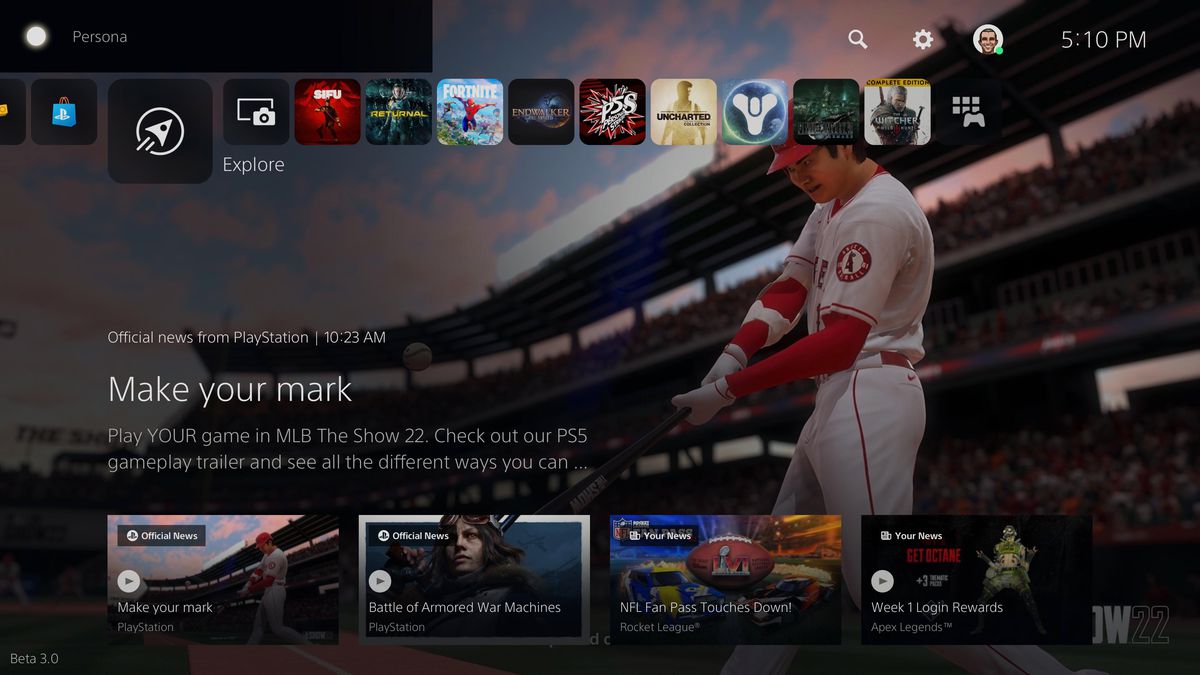 When your PS5 is listening for a command, you’ll see the dot and the box in the top-left corner of your screen. 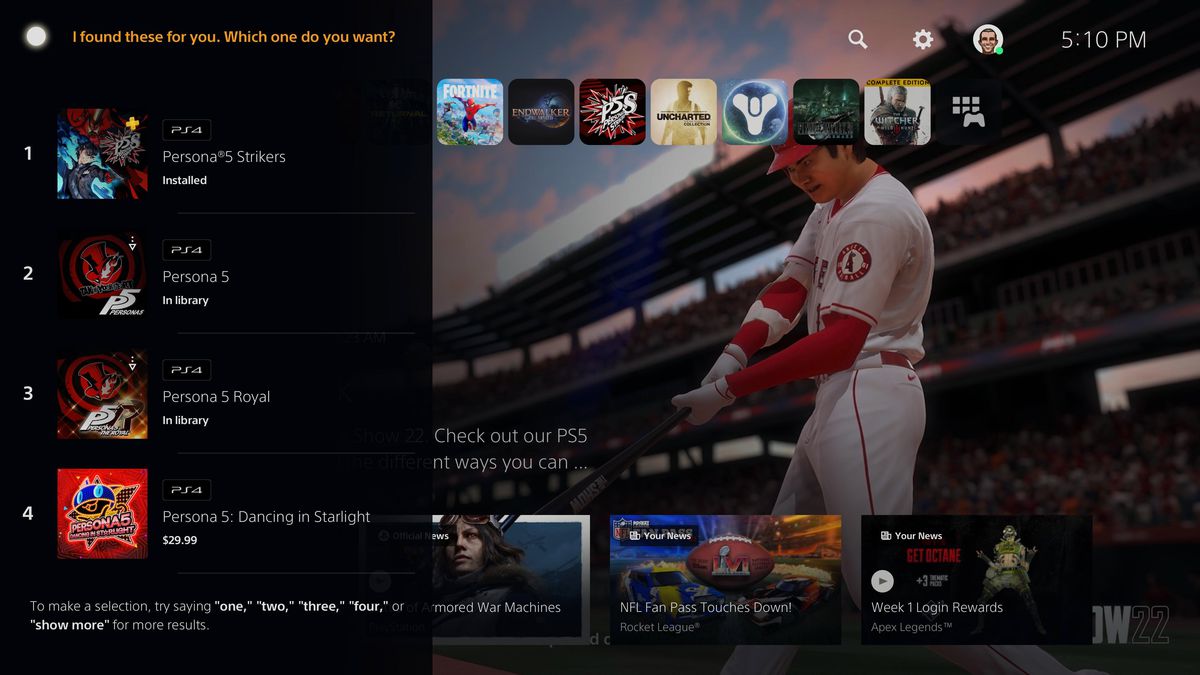 And here’s an example of what your PS5 might show when it doesn’t exactly know what you want.

In my short testing, my PS5 accurately translated the vast majority of my phrases, even ones with made up video game words like “GreedFall” and “Gungeon” (for Enter the Gungeon). It responded promptly nearly every time I said “Hey PlayStation,” though I’m not sure if having my DualSense controller persistently listening for my voice will affect its already middling battery life. (The PS5’s voice commands also work with a DualShock 4 connected to an external mic, a Pulse 3D wireless headset, or the PS5 media remote, according to a Sony support document.) And if you’d prefer to not have your PS5 listening for you all the time, you can turn that off and use still voice commands from a new “Voice” option that’s available when you tap the PlayStation button.

Personally, I’m not sure how often I’ll end up using these voice commands. But I’ve been impressed with what I’ve tried, and I could see how others might prefer voice commands to navigating the PS5’s sometimes clunky UI. It might be easier to jump to a game buried in your game library just by asking for it, for example. And if you say “Hey PlayStation, turn off,” it’ll begin to put itself into rest mode, which might actually be an easier way to turn it off than what we already have.

If you do use voice commands, you should know that Sony will record your voice for to be used for analysis. “When you enable Voice Command (Preview), voice data and interactions will be collected and processed exclusively for operation, analysis, and improvement of the feature in accordance with our Privacy Policy,” Sony says in a support document. However, if you do not want your voice data to be analyzed, you can opt-out in settings. 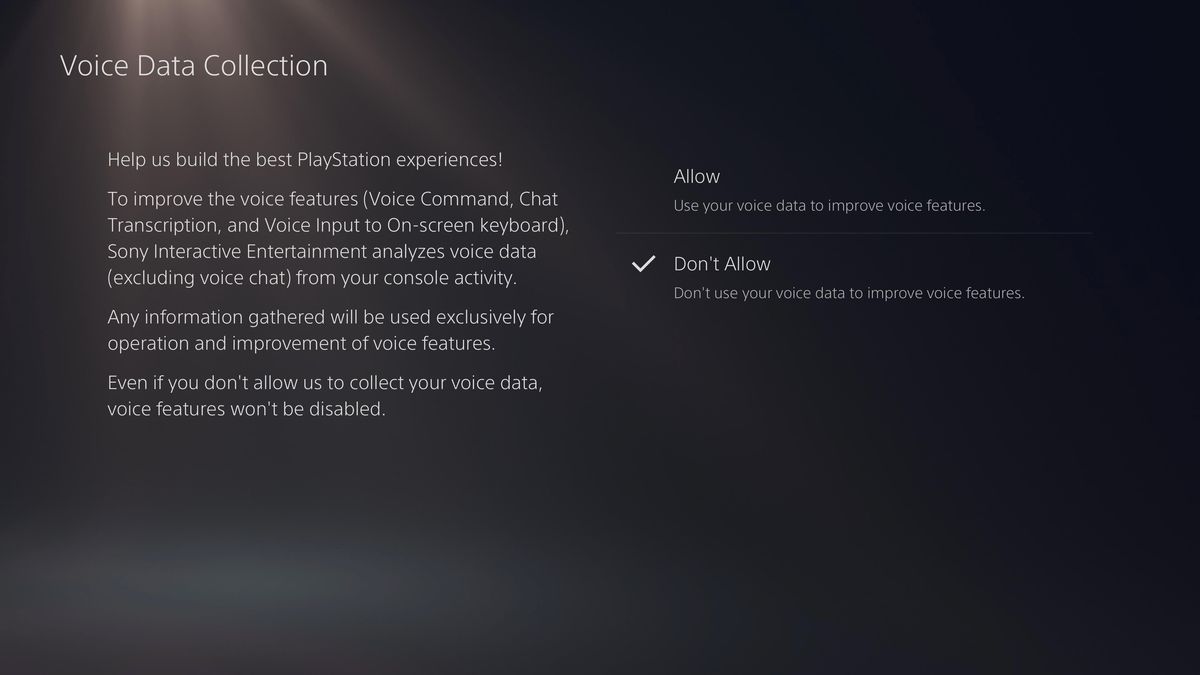 The Voice Data Collection options can be found in the PS5’s Privacy settings menu.

The PS5’s voice commands are available for people on the beta released Wednesday, though the feature only works in English and for users with accounts registered in the US and the UK. The beta also includes updates to the PS5’s UI, party chat, and more.