Tribit Soundbar review: This cheap 2.1-channel soundbar is no bargain

With audio performance this bad, the Tribit Soundbar simply isn’t worth it, no matter what the price.

Budget audio brand Tribit has made products that we’ve admired, including its recent QuietPlus 72 ANC headphone, but the company’s first soundbar isn’t among them. The all-in-one Tribit Soundbar might deliver decent virtual sound effects with its six-driver array, but this 2.1-channel speaker drops the ball at high frequencies, resulting in dull, muddy audio. Even worse, the built-in woofers trigger unpleasant cabinet vibrations if you crank the volume too high, a problem that’s exacerbated by a poorly designed volume control.

At $119.99, one might argue that you get what you pay for with the Tribit Soundbar, but you can actually get quite a bit more for this price. I’m thinking of the Roku Streambar, our runner-up pick for budget soundbars, which offers solid audio performance, Dolby processing, AirPlay 2 support, and a built-in Roku streaming player, all for the same list price. You can even upgrade the Streambar with additional speakers for surround sound, a trait the Tribit Streambar doesn’t share.

This review is part of TechHive’s coverage of the best soundbars. Click that link to read reviews of competing products, along with a buyer’s guide to the features you should consider when shopping.

The Tribit Soundbar does come with plenty of legacy inputs for older TVs, and it ships with both an HDMI and optical cable (although no batteries for the remote). But with audio performance this bad, Tribit’s new soundbar simply isn’t worth it, no matter what the price.

The Tribit Soundbar has a 2.1-channel configuration, with a pair of 2.25-inch mid-tweeters supplying audio to the left and right channels and two built-in, 3-inch woofers delivering the low-frequency effects.

While Tribit says that its soundbar offers DSP-powered “3D surround sound” effects, it doesn’t pack anything in the way of virtualized Dolby Atmos or DTS Virtual:X audio. Indeed, as far as I can tell (I’ve reached out to Tribit for more details), the Tribit Soundbar doesn’t support onboard Dolby or DTS decoding at all. It’s fairly unusual for a brand-name soundbar to skip even Dolby Audio processing, but you’ll be fine as long as you offload Dolby and DTS decoding duties to your TV or other video sources (setting them to output multichannel PCM audio will do the trick).

Like many (though not all) soundbars in this price range, the Tribit Streambar lacks Wi-Fi connectivity, although it does support Bluetooth 5.0.

Measuring 37.2 x 4.9 x 2.9 inches (WxDxH) and weighing in at 8.5 pounds, the Tribit Soundbar is fairly bulky and heavy, and at nearly three inches tall, it might block a sliver of the bottom edge of your TV screen (it did in the case of my low-slung LG C9 OLED TV). You can, however, mount the soundbar under your wall-mounted TV using the included mounting hardware.

Among the Tribit Soundbar’s various inputs is a single HDMI-ARC port. If you have a TV that supports HDMI-ARC (which, if you bought your TV within the last decade or so, it most likely does), you can simply connect your TV’s HDMI-ARC port to the matching connector on the soundbar using the included HDMI cable. Once that’s done, your TV will pipe audio from any source (including connected video streaming devices, Blu-ray or game consoles, or its own over-the-air tuner or smart TV apps) down to the soundbar. 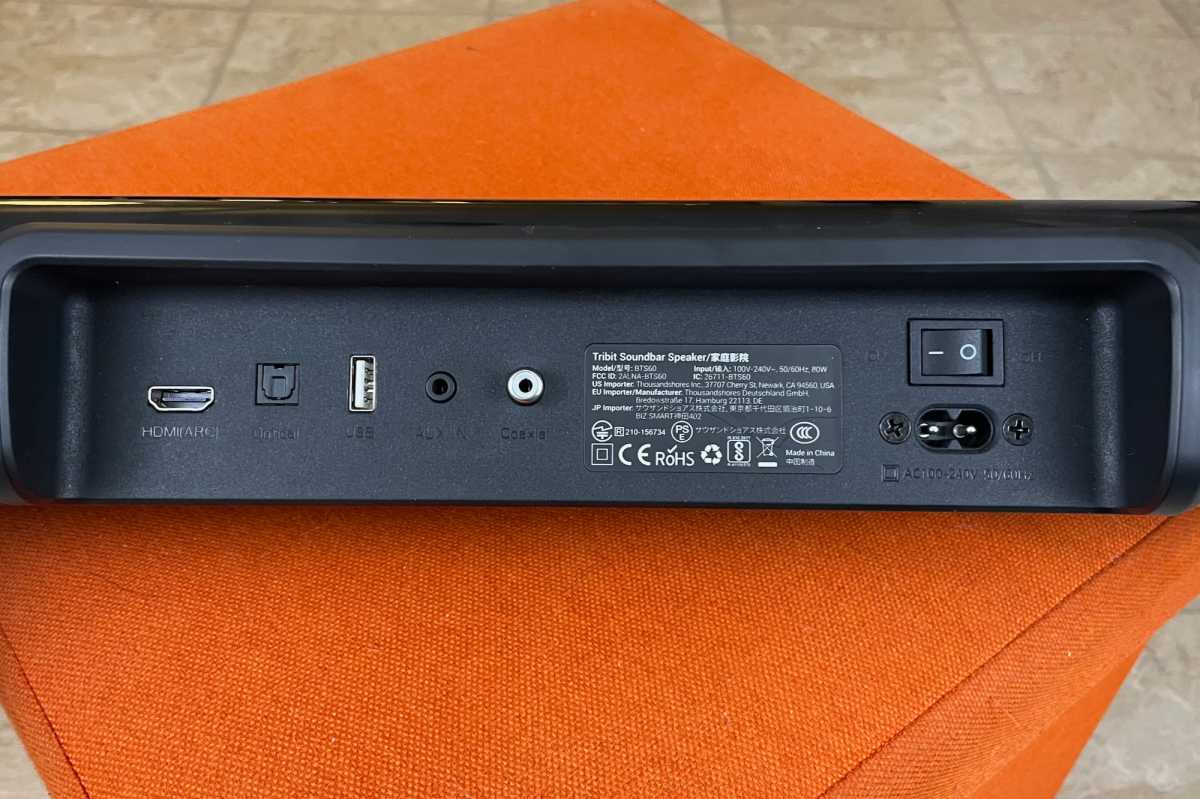 The Tribit Soundbar boasts an HDMI-ARC connector, plus plenty of legacy inputs (including optical, coaxial, and 3.5mm analog) for older TVs.

The Tribit Soundbar doesn’t offer any additional HDMI inputs, which means you can’t connect a video source directly to the soundbar and then send both the video and audio to the TV. Pricier soundbars often (but not always) come with one or more HDMI inputs along with the HDMI-ARC interface.

Besides HDMI-ARC, the Tribit Soundbar also has an optical (Toslink) input, a coaxial connector, and a 3.5mm auxiliary jack. Using that array of inputs, you should be able to connect the soundbar to practically any TV, including older, pre-HDMI sets with either optical or RCA-style audio outputs. Both HDMI and optical cables are included in the box.

There’s also a USB port that can play audio files stored on an external drive. I managed to play MP3, WAV, and Ogg Vorbis files from a USB thumb drive, but a FLAC file refused to work.

To the right of the Tribit Soundbar’s audio inputs is a connector for the roughly five-foot power cord. Just above the power connector is a rocker-style switch that can completely cut off the soundbar’s power consumption.

On the right end of the soundbar are six buttons for power, volume up, volume down, input source, EQ mode, and Bluetooth pairing.

Buttons on the side of the Tribit Soundbar let you toggle the power, adjust the volume, cycle through input sources, and put the speaker into Bluetooth pairing mode.

A relatively large LED display on the front of the soundbar tells you which input is selected, and it can also show the volume level and EQ mode (while adjusting the relevant controls). The LED is fairly bright, but it dims to a reasonably unobtrusive level after a few seconds of inactivity. There’s also a small red LED that glows when the soundbar is in standby mode. 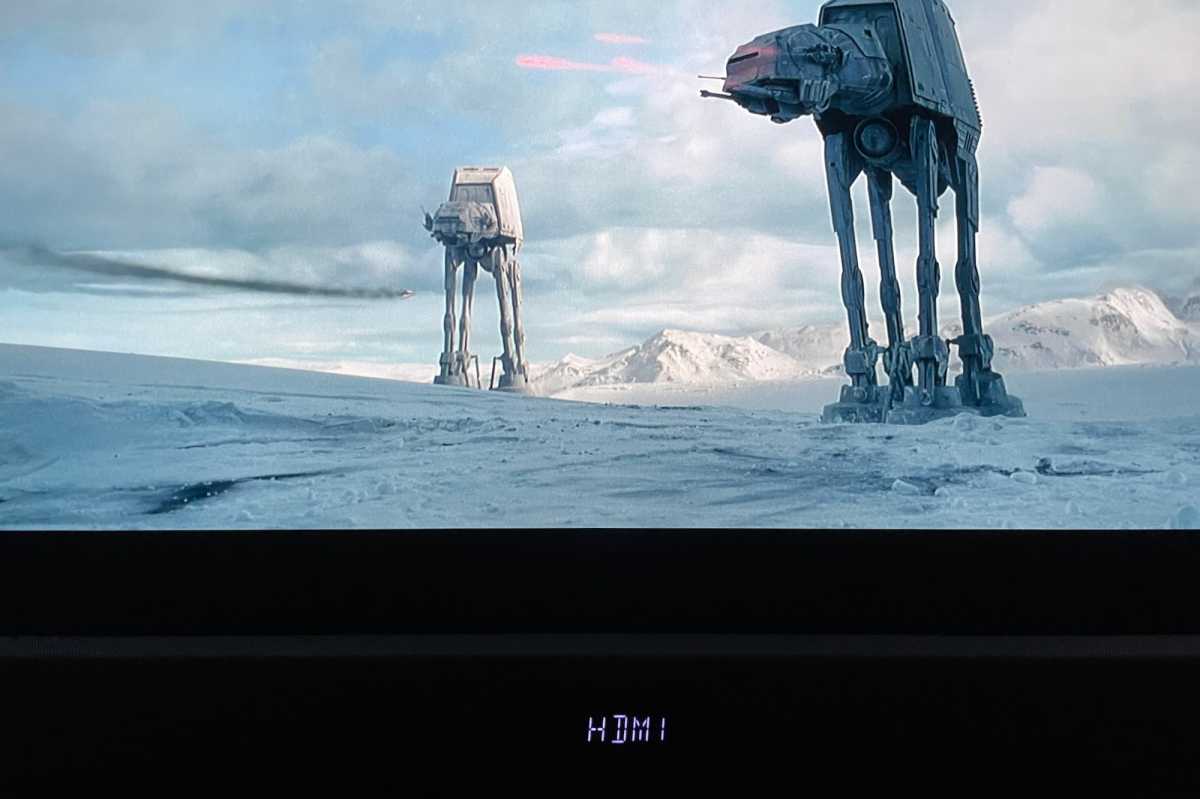 The bright LED display on the Tribit Soundbar eventually dims to a less distracting level.

The remote that comes with the Tribit Soundbar is fairly basic; it includes Mute and Source buttons near the top, a five-way navigation pad that lets you adjust the volume as well as play, pause, and skip tunes. Below the pad, a quartet of buttons let you switch between the four EQ modes (Movie, Game, Music, and News/Voice), while a final button engages Bluetooth pairing mode. Notably, there are no controls for adjusting the bass or surround levels, aside from the EQ presets. I was also annoyed that the two required AAA batteries for the remote aren’t included in the box. 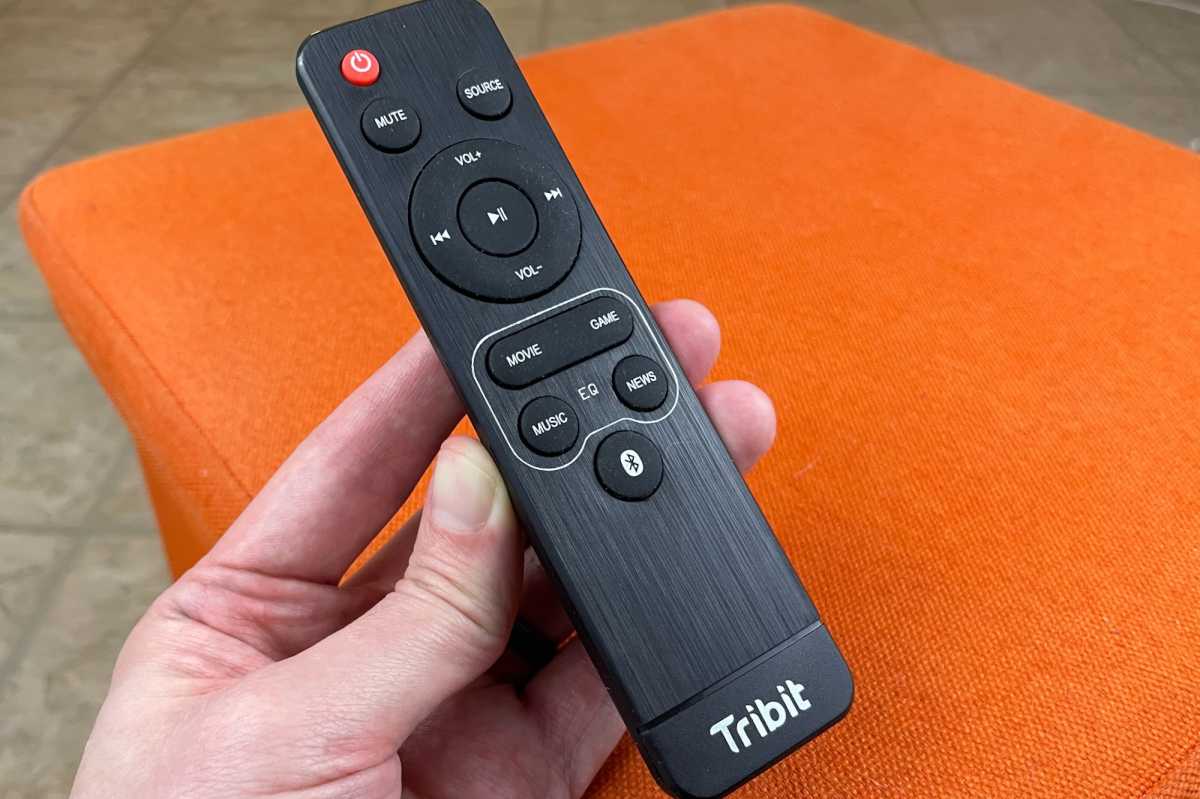 The Tribit Soundbar’s remote is reasonably intuitive, but you’ll need to supply your own AAA batteries.

I’ll just come out and say it: The Tribit Soundbar is one of the worst-sounding soundbars I’ve ever tested, regardless of price range.

To be fair, the speaker has its good points. Its virtual surround effects in the Movie EQ mode are pretty solid, with the frantic Battle of Hoth chapter in Star Wars: The Empire Strikes Back spread across an impressively wide soundstage. Also–and provided you’re very careful with volume levels–the bass response is deep and punchy, with the roar of the Millennium Falcon’s engines sounding full-throated yet tight.

That said, the Tribit Soundbar suffers from a significant lack of high-end detail, with John Williams’s Empire score sounding muddy rather than crisp, while the hiss of ice showers from the crushed ceiling of the Rebel base sounded disappointingly muffled.

Jumping to 1978’s Superman, the “whoosh” of the opening titles again suffered from a lack of crispness. Even worse, the top of the Tribit’s cabinet began vibrating from the deep bass, resulting in audible distortion, starting at level 7 of the 16-step volume control. The distortion reared its ugly head again during the launch sequence of Apollo 13, this time at volume step 6.

Speaking of the Tribit Soundbar’s volume controls, the volume steps ramp up way too fast. There’s a big jump in volume between steps 2 and 3 on the dial, which means the volume goes from very quiet to medium level in just a couple of clicks, and by step level 7 or 8, the volume gets (to my ears, anyway) uncomfortably loud. I didn’t crank the volume any higher for fear of blowing up either the soundbar or my eardrums.

I also tried an episode of The West Wing, and I was immediately struck by the loud but muddy dialog, as well as the muffled score during the opening credits. Switching from Movie to News (or Voice) mode, the audio nosedived into flat-out bad territory, with the surround and bass effects completely removed and the dialog sounding as muddled as an AM radio transmission. Ugh.

Switching to Music mode, I teed up Bruce Springsteen’s “The Ghost of Tom Joad” (streamed from Spotify via Bluetooth), and again, I was disappointed by the lack of high-end detail, while Billie Eilish’s “Oxytocin” suffered from occasional moments of bass distortion. Finally, Bertrand Chamayou’s performance of Maurice Ravel’s solo piano works sounded just awful, illustrating how poorly the Tribit Soundbar handles high-frequency audio.

Tribit has come up with winners before when it comes to budget home-audio products, and perhaps its next soundbar will be a worthy contender. Unfortunately, the current Tribit Soundbar is a dud, even considering its budget price.