A go-getter laptop at the right price.

Every decision that Xiaomi has taken with this year’s Mi Notebook series—technically this is the company’s second attempt at laptops in India—seems guided by feedback. There are two models—Mi Notebook Pro and Mi Notebook Ultra. The pro notebook starts at Rs 56,999. The ultra starts at Rs 59,999.

Both have so much in common, it narrows down to the kind of screen you’re looking at. The Mi Notebook Ultra—which is the subject of this review—will get you a bigger and faster display.

That display is where we think it’s best to start this review because that’s the Mi Notebook Ultra’s biggest highlight. While last year’s Mi Notebook ‘horizon’ edition with its expansive near edge-to-edge screen set a benchmark for budget laptops, the Mi Notebook Ultra takes all that up a notch—in more ways than one.

It has a bigger 15.6-inch display with a 3200×2000 pixel or 3.2K resolution and faster 90Hz refresh rate—a combination that’s unheard of at this price point. The panel is IPS and covers 100% of the sRGB colour gamut. 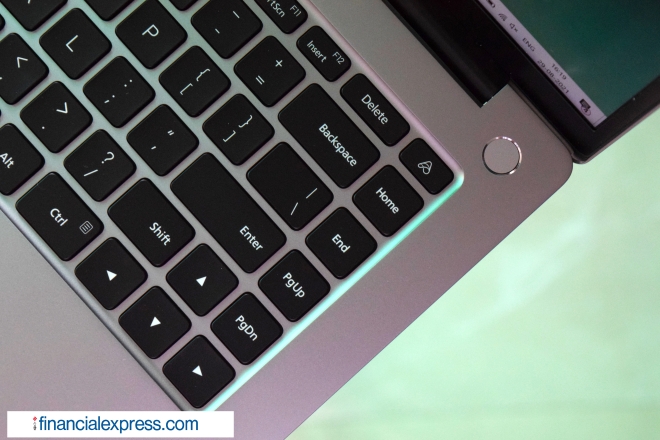 Xiaomi has applied the “if it ain’t broke, don’t fix it” thumb rule to the Mi Notebook Ultra. (Photo credit: Saurabh Singh/Financial Express)

It’s nice and crisp, gets plenty bright and has good viewing angles though colours don’t pop as much as say, the Realme Book. Asus has an even more colourful—and contrasty—VivoBook K15 OLED in the same price range if you’re into that sort of thing.

For what it’s worth, the Mi Notebook Ultra seems geared more towards productivity use cases. It has a tall 16:10 aspect ratio for instance—which is another rarity among budget laptops—and matte finish that combined make it an instant recommendation for work-from-home.

Then when you factor in the tiny bezels—on all sides no less—suddenly, you have this big, near uninterrupted canvas at your disposal. The sheer value of the Mi Notebook Ultra’s screen can’t be stressed enough. 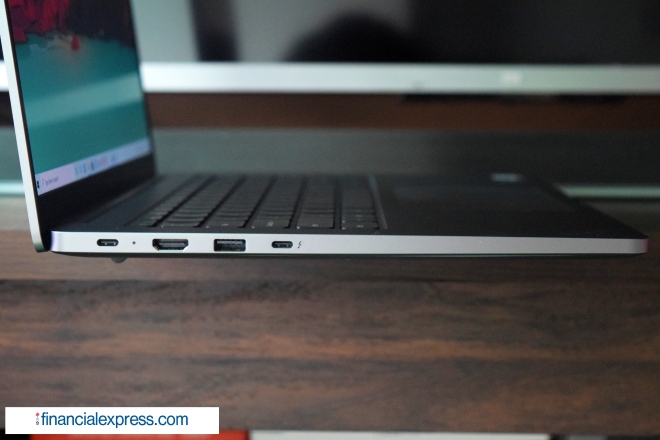 Xiaomi has also been able to cram a 720p webcam—that’s also positioned just right—despite this laptop having such slim bezels. The quality may not be that great, but at least you get the option now—this was missing on last year’s models.

When it comes to design, Xiaomi has applied the “if it ain’t broke, don’t fix it” thumb rule to the Mi Notebook Ultra.

Rather, it has worked on refining the fit and finish. The ultra notebook also makes use of new—and sturdier—materials. It’s still all unibody but it’s now milled out of a single block of Series 6 Aluminium. This is an improvement over the original Mi Notebook 14. The dimensions too—17.9mm in thickness and weighing in at 1.7kg—are pretty impressive for a 15-inch laptop.

Also Read | Mi Notebook 14 Horizon Edition review: Xiaomi brings its magic to laptops, but is the show any good?

Like its predecessor, the design of the Mi Notebook Ultra is very minimalistic and will most definitely remind you of the MacBook. A very prominent Xiaomi branding is etched on the lid this time. The Mi Notebook 14 did not have any such branding. 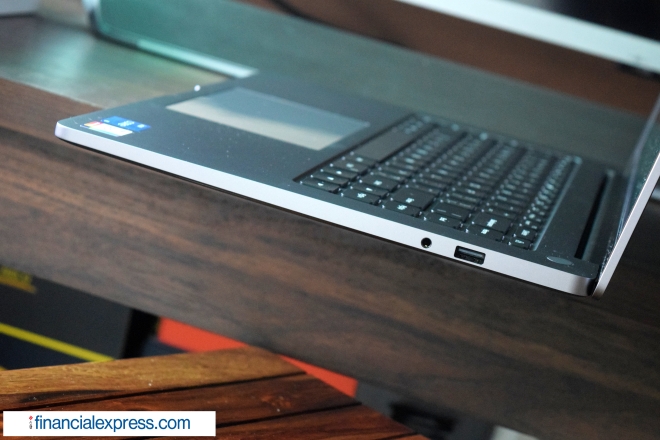 Be that as it may, what’s important is that Xiaomi seems to have cut no corners while designing the Mi Notebook Ultra. There’s no weird flex, no loose ends. The attention to detail is spot on. As an added bonus, you can open the lid of this laptop with one hand, something that’s hallmark for higher-end, more expensive machines. So, well done, Xiaomi.

The keyboard and the deck have been cut from the same cloth which is to say they’re built really, really well. Xiaomi isn’t cutting any corners here either.

The laptop has a backlit keyboard with three levels of illumination. One of them refers to turning the lighting off completely though. Xiaomi has somehow squeezed in a dedicated ‘macro’ key, a popular staple among many gaming laptops but also something we don’t see a lot in a laptop of its class. It’s a handy addition. For biometrics, there is a physical fingerprint reader which supports Windows Hello. It works well.

Individual keys—including the arrow keys—are well spaced out and have 1.5 mm travel. They’re reliable mostly, but there is some room for improvement. We would personally have liked a little more resistance. 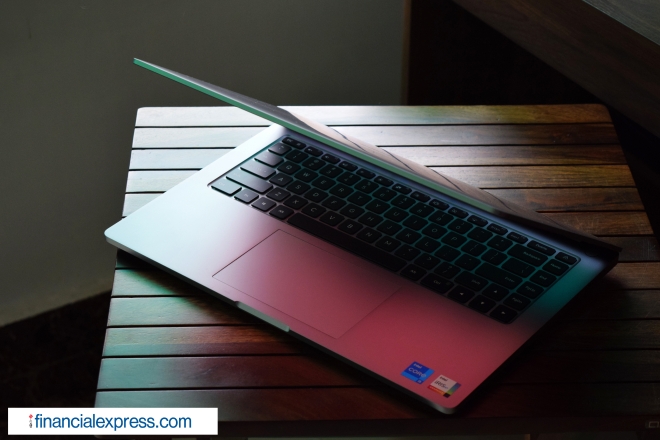 The trackpad is also an improvement. It is 62% larger than the one in the previous generation of Mi Notebook 14 series. Windows Precision Drivers are supported. The experience, again, leaves you satisfied for the most part but the physical clicks feel a little too stiff for our liking.

The Mi Notebook Ultra is pretty stacked when it comes to connectivity options. It has a Thunderbolt 4 port, USB Type-C port, HDMI 1.4 port, a USB 3.2 Gen 1 port, a 3.5mm audio jack and USB 2.0. The only notable omission is a dedicated SD card reader. The laptop supports Wi-Fi 6 and Bluetooth 5.1. Rounding off the package are two 2W speakers. They’re placed at the bottom and offer decent, if a little muffled, sound.

As if like clockwork, Xiaomi has been able to pack some of the most powerful hardware available in the market today inside this laptop and undercut competition in pricing at the same time. There are three configurations to choose from—

The i5-11300H is a 4 core, 8 thread processor built on a 10nm process node with a base clock speed of 3.10GHz and boost speeds of up to 4.4GHz. The chip consumes up to 35W of TDP—in the case of the model we’re reviewing. The RAM is soldered onto the motherboard. The SSD is swappable—only—since there’s no additional slot for expansion.

The Tiger Lake H35 is an interesting choice. It basically slots between the Tiger Lake UP3 series for ultraportable devices and their regular 45W H-series counterpart used inside many gaming-focused machines. Think of it as an ‘overclocked’ UP3 which is to say, the idea is to offer the best of both worlds—power and efficiency.

And the results are on very expected lines. The i5-11300H-powered Mi Notebook Ultra performs very well in day-to-day use delivering more power in a relatively compact package that’s also able to do a fair bit of justice to heat management.

Thermals were a big concern in the last Mi Notebook. This year’s model, though it can get warm when stressed, doesn’t heat up or throttle as much and gives you consistently good performance even for extended periods of time.

Battery life is also very good for the asking price. The 70WHr battery inside the Mi Notebook Ultra will get you through 7-7.5 hours easily with moderate to heavy usage. There is support for 65W USB Type-C charging this time which will charge the laptop from 0 to 50% in just under 45 mins.

The one area where Xiaomi could have done better is the graphics especially after raising so many expectations with the last Mi Notebook. 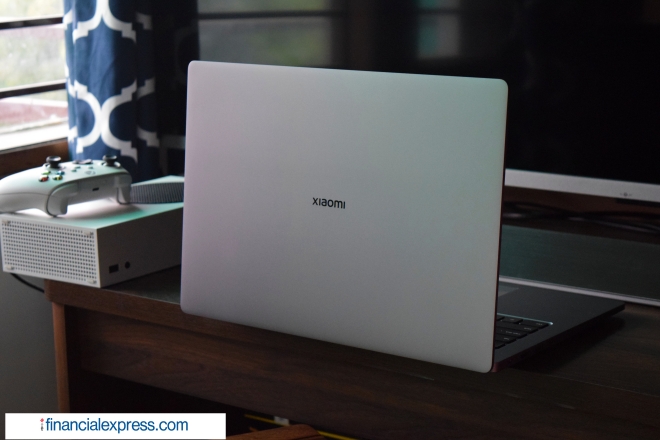 The one area where Xiaomi could have done better is the graphics especially after raising so many expectations with the last Mi Notebook. (Photo credit: Saurabh Singh/Financial Express)

Unlike its predecessor which came with dedicated Nvidia GeForce MX350 graphics, the Mi Notebook Ultra is stuck with integrated Iris Xe Graphics. Not even the i7 variant—which should perform even better—has a dedicated GPU which is a big bummer. Benchmarks and real-world use concur. Gaming is a no-go on this laptop unless you’re fine playing some light, casual, older games that won’t tax it.

Mi Notebook Ultra | Should you buy

The Mi Notebook Ultra is a go-getter laptop that’s priced right. It builds on the platform set forth by last year’s model and adds much-needed ‘value’ to—finally—give you the complete package, one that’s classic Xiaomi. It’s a return to form for a company we all know so well for being notorious for coming out with great products that almost always end up punching way above their weight class.

The Mi Notebook Ultra comes highly recommended if you’re someone looking for a premium, good-looking laptop to get the job done without breaking your bank. Just don’t be looking for any gaming, and you’ll be surprised by everything that Xiaomi has been able to pack inside this sleek, classy machine.

As a side note, the Mi Notebook Ultra is Windows 11-ready with the update expected to arrive soon.

Financial Express is now on Telegram. Click here to join our channel and stay updated with the latest Biz news and updates.