Support for end-to-end encrypted (E2EE) group chats and calls was first announced in August 2021, promising Messenger users a way to keep their personal conversations safe from criminals and nation-state surveillance. Many governments, however, have not necessarily been on board with the idea, saying that Messenger’s plans to expand its encryption efforts would complicate law enforcement’s ability to investigate crimes. But Meta has pushed back, noting that E2EE was already widely used by apps like WhatsApp and was becoming an industry standard.

E2EE for group calls and chats wasn’t fully launched at the time of last year’s announcement, though. Instead, Meta said it would first begin testing the feature for friends and family who already had an existing chat thread and were already connected. It also said it would begin a test for delivery controls that would work with E2EE chats, allowing users to prevent unwanted interactions so they could decide who went to their chat list, their message requests folder, and who couldn’t message you at all.

Now, months later, the feature is fully rolled out to Messenger users globally, who can choose to turn on E2EE for their private conversations.

Soon, Messenger will also warn users if someone screenshots a disappearing message in E2EE chats. This is the same feature that’s already offered in Messenger’s vanish mode — a feature that functions much like Snapchat, where messages will disappear after they’ve been seen. If someone takes a screenshot of a vanish mode chat — and now a disappearing message in E2EE chats, as well — you’ll receive a notification so you can address this with the other party, or even block or report the conversation if need be. The company says these notifications will roll out “over the next few weeks.”

Finally, E2EE chats will also gain access to other features that have been available to non-E2EE before, including GIFs, stickers and reactions, as well as support for replies to a specific thread, typing indications and forwarding options. Verified badges will also be available to E2EE chats to help you identify authentic accounts, when chatting. And users will be able to save media with a long-press and edit photos and videos before sending. These features are not new, but they’re new to end-to-end encrypted chats. 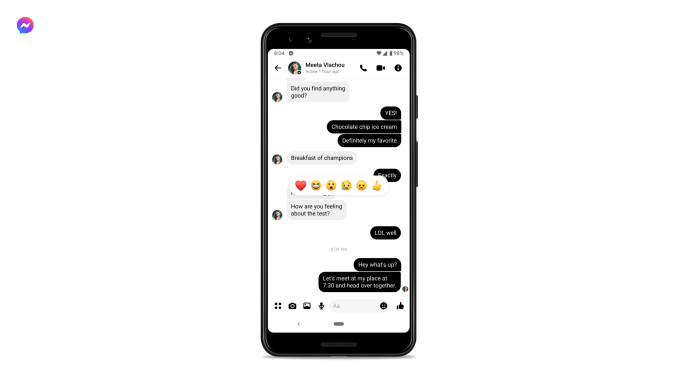 Meta says all the features are available on all platforms, including web and mobile, for all users. But the rollout is ongoing, so some people won’t see all of the features immediately.