JVC has produced a worthy entry in the crowded noise-cancelling headphone category with its $300 model HA-S100N. It features a Bluetooth 5.1 radio, hybrid noise cancellation, and one of the better touch-control mechanisms I’ve seen on a wireless headphone. JVC’s cans are priced $50 to $80 lower than the most popular headphones in this category, and they have some definite pluses. Even if JVC hasn’t quite delivered a pair destined to take the crown, the HA-S100N is a worthy alternative to the market leaders.

The HA-S100N have a novel means of powering on and off that should extend their battery life. While in its case with its earcups turned perpendicular to the headband, they’re off. When you put them on your head, they automatically turn on and connect. Take them off, turn the earcups, and they’re off again.

This review is part of TechHive’s coverage of the best noise-cancelling headphones, where you’ll find reviews of the competition’s offerings, plus a buyer’s guide to the features you should consider when shopping for this type of product.

For the first couple of days, this method seemed weird and borderline annoying. Once you adjust to the experience, though, it’s great. Too many wireless headphones have tiny buttons that aren’t easy to find or push to power them up or down. Use these for a short while and this approach will seem like the only way to go. 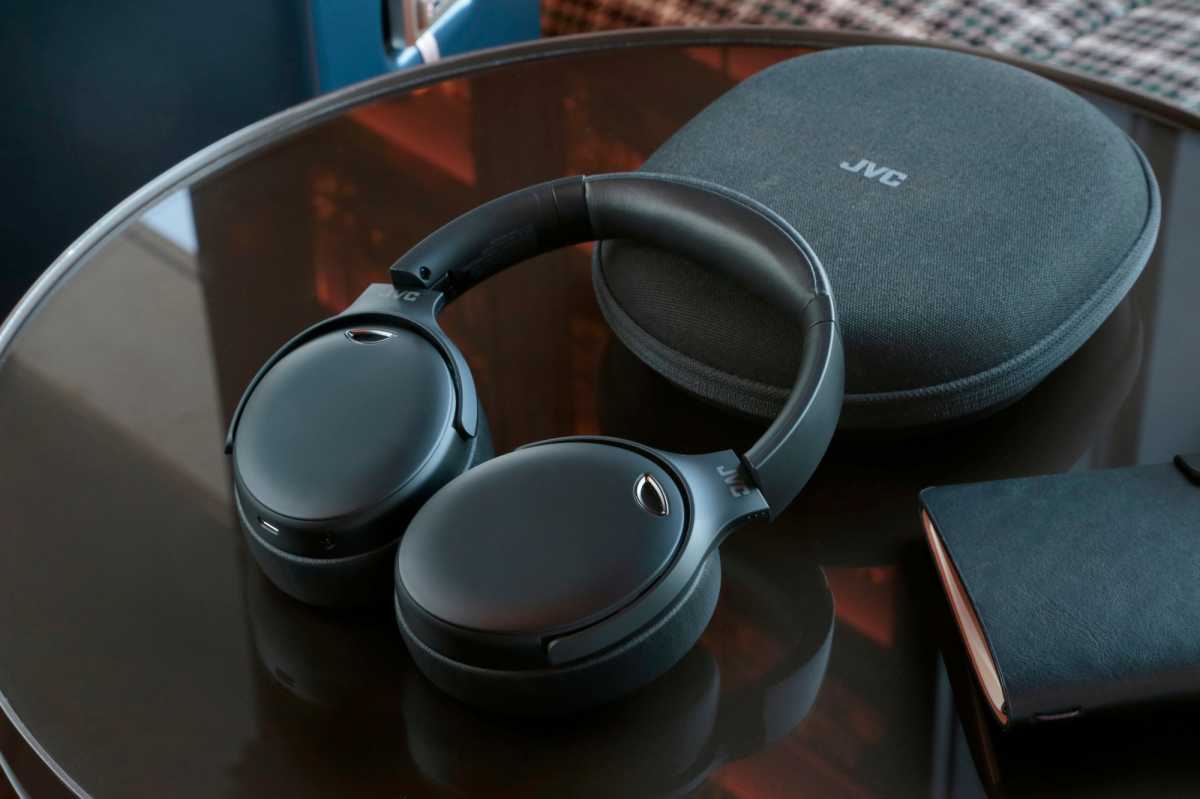 The HA-S100N headphones automatically turn off when the earcups are turned perpendicular to the headband.

JVC put the headphone’s touch control panel on the right earcup. Every brand that uses this approach seems to require a slightly different amount of pressure and a distinctive location where you need to touch the controls for them to work.

The HA-S100N recognizes the gentlest touch I’ve ever encountered on this kind of headphone. Tap too hard and nothing happens. Lightly lay your finger or fingers (but not your fingernail) on the pad and the controls work remarkably well.

A single touch plays or pauses the music. Raise or lower the volume by swiping up or down the earcup. Swipe back-to-front to skip forward and front-to-back to go back to the beginning of a track or skip to the previous one. There’s a bass sub control on the side of the earcup that you touch three times to switch between Normal, Bass, and Clear settings. It helpfully beeps when you make each touch and announces the new setting when it switches.

Two-finger touches on the earcup switch between the high noise-cancelling setting, low noise cancelling, noise cancelling off, and the ambient sound function. Again, when you execute a change, the headphones announce your new setting. There’s also a helpful Touch & Talk feature: When you touch the same spot that controls the sub settings twice (instead of three times), the headphones lower the volume to a level where you can have a conversation.

A single touch on the right earcup both answers and hangs up a phone call. Press and hold the earcup for about a second to reject a call.

Once you set up the headphones to work with Google Assistant, the same press-and-hold action activates the voice assistant app on your smartphone.

Touch controls have become the standard for wireless headphones in this price range and, once you master the learning curve for JVC’s approach, these touch controls are easier to use than the ones for the Sony WH-1000XM4. No one’s yet made touch controls that are as satisfying or easy-to-use as actual mechanical buttons, but JVC’s execution is better than most. 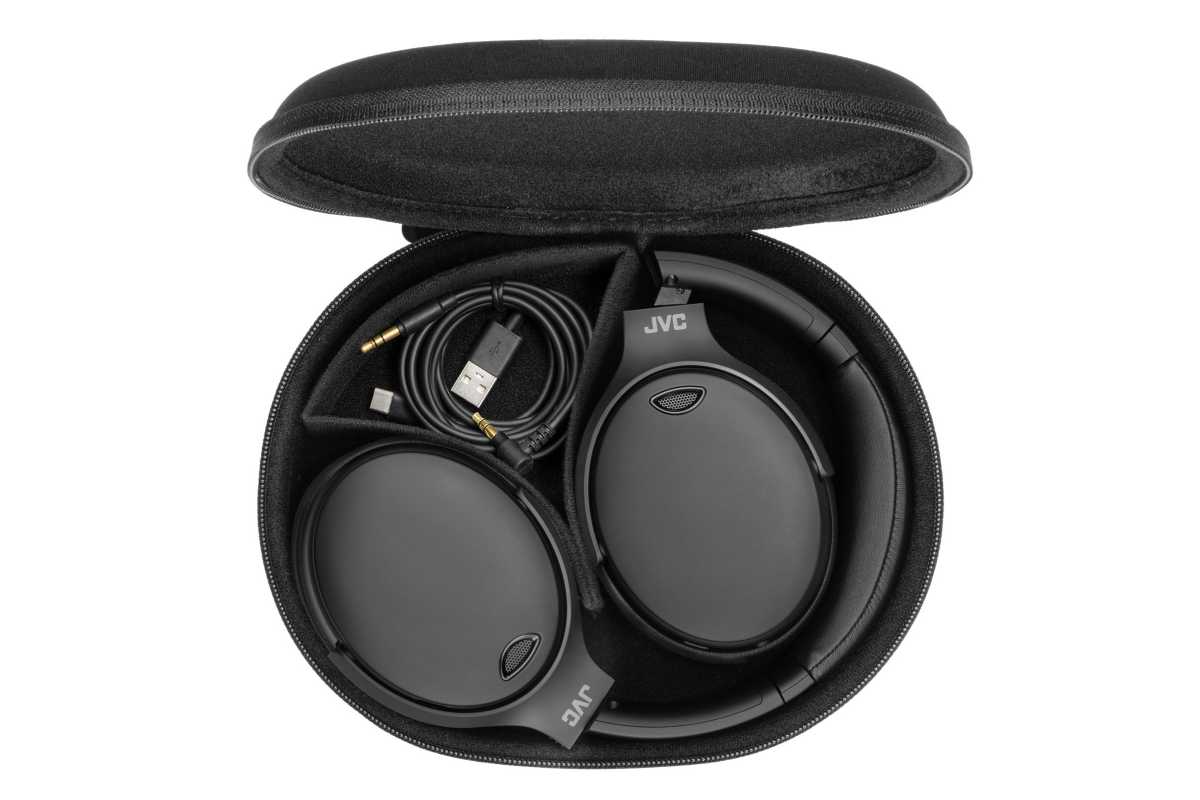 The HA-S100N headphones come with a protective case, a USB-C charging cable and a 3.5mm audio cable for wired listening.

Filtering out the noise

JVC is aiming for the HA-S100N to compete in a price range that’s dominated by popular headphones from Sony and Bose. They use a hybrid system that features both external microphones and internal ones that capture noise around the ears to create a better noise-cancelling experience.

The Sony WH-1000XM4 justifiably have a strong following, but I found that JVC’s noise cancellation bests them in the frequency range occupied by fan and airplane noise. The Sony might have a stronger noise cancelling experience overall, but the slightly more relaxed JVC experience still cuts down on the noise without creating the level of eardrum suck that some listeners experience with other brands.

That’s to say that the JVC experience is very good without going all-in with noise cancellation. Depending on what you’re looking for, that’s either a very strong plus or a slight demerit.

You get 22 hours of battery life with noise cancelling turned on; 25 hours when it’s off. The headphones charge via an included USC-C cable. A full charge takes approximately 3 hours.

There’s an included carrying case and a detachable 1.2m cable for wired listening. You can turn off the power when using the cable by pressing the sub control panel for approximately 5 seconds. These headphones weigh 9.5 ounces and have proven to be remarkably comfortable for extended use. Like current noise-cancelling models from Sony and Bose, the bottoms of the earcups are pitched slightly forward for a design that’s easy to wear. JVC used durable protein leather for the headband and earpads. 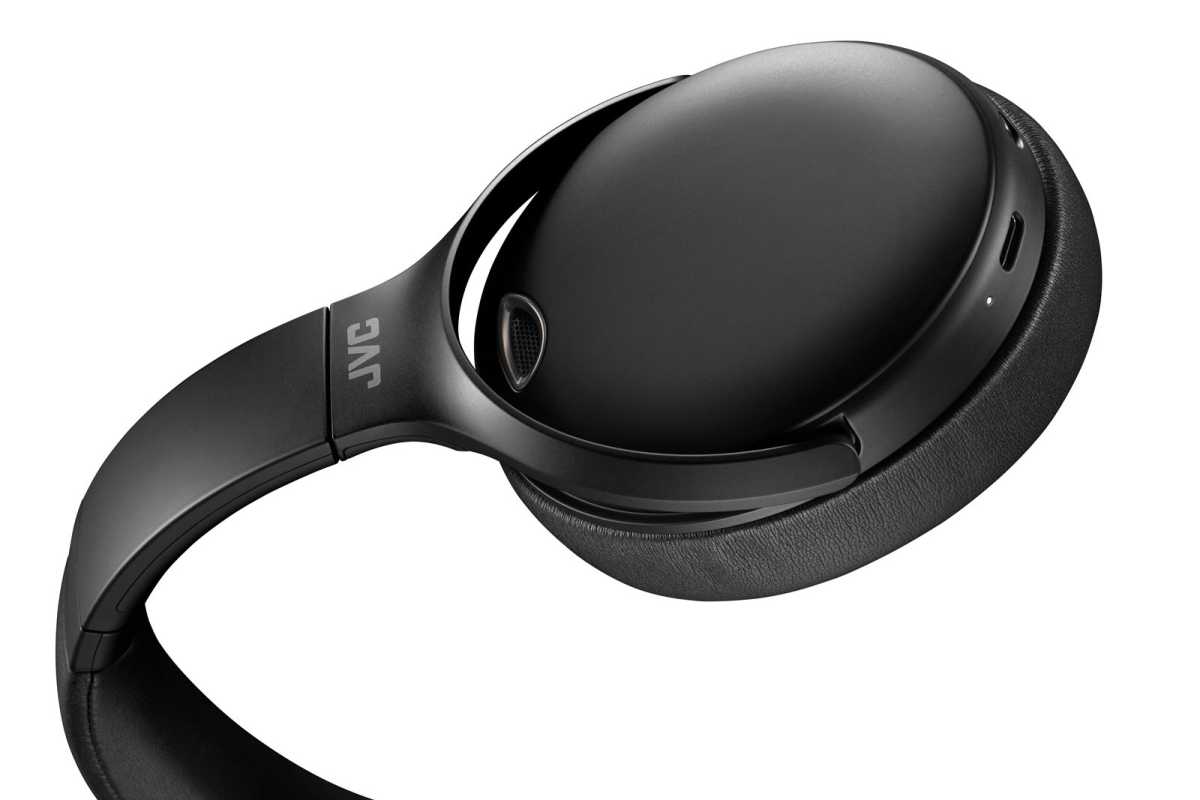 The HA-S100N sub controls are located just below the hinge on the right earcup.

The HA-S100N use the Bluetooth 5.1 standard and support the SBC, AAC, aptX, and aptX-HD codecs. They have 40mm drivers with neodymium magnets and present impedance of 32 ohms.

I spent time with the excellent Last Night in Soho–Official Playlist, which compiles the songs featured in director Edgar Wright’s 2021 movie. I listened via Apple Music, but it’s also available on Spotify. In a head-to-head shootout with the Sony WH-1000XM4, Sony gets the nod for more detailed reproduction, but that detail comes with the intense noise cancellation that comes with those headphones.

The JVC headphones might not sound quite as good, but they’re also a far more enjoyable experience if extreme noise cancellation gives you a headache. If you’re comparing headphones at the airport Brookstone outlet, Sony’s knockout noise cancellation might seem like the definite first choice, but I suspect a lot of listeners will prefer JVC’s sound profile.

If you’re looking for the best noise-cancelling wireless headphones to buy right now, the JVC HA-S100N offer a viable alternative to the other brands currently grabbing most of the attention. They’re different enough from the other brands to offer a legitimate choice for anyone who’s in the market.

James has worked in music as a producer, A&R executive, music publisher, manager and record store clerk. He writes about music, technology and movies from his home in Georgia.