Fire might be a homeowner’s greatest fear, but any insurance company will tell you that water is the far more common cause of property damage, even if you don’t live in an area subject to flooding. And it can come from many sources: A failing water heater, a burst pipe, a broken supply line under your sink, a clogged toilet, or even a split hose connected to your washing machine.

Just as it’s essential to have a smoke detector in each of your home’s bedrooms and common areas, you’d be wise to install leak detectors in places where water damage could start: The laundry room, water heater closet, the bathroom, under your kitchen sink, and so on. Leak alerts are arguably less important for renters, but it’s something landlords might want to consider—although that raises the issue of how the sensors would connect to the internet. More on that later.

If you think a leak sensor is something your home should have, here are our top picks. If you want more information on this topic and want to read more reviews, scroll down a bit.

The Phyn Plus smart water valve is our favorite smart water shut-off valve, so we’re pleased as punch that the company now offers a smart water sensor that can work alone or in conjunction with the more expensive device. Like the runner-up Flo by Moen Smart Water Detector, you’ll get the most benefit from Phyn’s sensor if you also own the Phyn Plus, but operating the sensor by itself will give you plenty of warning that you should shut off your water supply manually before your home incurs significant water damage.

The Flo by Moen Smart Water Detector monitors for the presence water in locations it shouldn’t be (from a leaky supply line, appliance, or drain pipe), tracks ambient temperatures and can warn you of freezing conditions that could lead to a burst water pipe, and reports ambient humidity and raises an alarm if the air becomes so moist that it could lead to to the growth of mold. You’ll get the most benefit from the device if you also own the Flo by Moen Smart Water Shutoff, which can automatically turn off your water supply in an emergency, but it’s a great smart home device even if you don’t.

The Phyn Plus is equipped with sophisticated sensors that perform real-time analysis on your entire home’s fresh water system, reporting on water temperature, water pressure, and water consumption. Using a pattern analysis algorithm, it can detect a water leak anywhere in your home and shut off your main water supply in the event of a catastrophic leak, such as a burst pipe. Since it must be installed on your main incoming water supply, the manufacturer recommends that you have a professional plumber install it.

There are some features of Flo Technologies’ Flo by Moen smart valve that we actually prefer over the Phyn Plus—namely, its ability to make robo calls warning you of potential problems with your water-supply system before it shuts it off—but we found the Phyn Plus to be a little more sophisticated. As with the Phyn Plus, the Flo by Moen must be installed on your main incoming water supply, so Moen recommends that installation by a professional plumber.

This second-generation Flume still can’t turn off your water supply if it detects a leak, but it costs hundreds less than the systems that can, and you won’t need to cut into your water pipe—or hire a plumber—to install it. The Flume 2 is even better than the first-generation product and is a fantastic value for $199.

To measure each sensor’s effectiveness, we placed it on a bathroom tile, and then poured enough water to cover the surface of that tile. Most sensors responded immediately, though the Honeywell Lyric routinely delayed its alarm by around 30 seconds, which we noted in our full review.

We measured alarm volume using the Decibel 10th app on an iPhone 6 Plus, with the microphone pointed toward the sensor from six inches away. Empirical testing aside, the Honeywell Lyric’s volume was subjectively much louder than the other sensors.

We didn’t directly test integrations with other smart home devices, but inspected each companion app and the online service IFTTT for available features. We consulted manuals and product listings for battery life estimates and device dimensions.

Editors’ note: This testing methodology does not apply to leak detection systems that monitor your water supply line, such as the Flo by Moen, Sinopé Sedna, and Phyn Plus.

What to look for when shopping

You might be surprised by the diverse approaches to what seems like a simple task: detecting the presence of water where it shouldn’t be. Some operate on Wi-Fi, others require a hub to communicate. Some plug into an AC outlet, others require a battery. Some come with external sensor cables and mount to the wall, others lay on the floor. Most, but not all, have onboard sirens.

If the recommendations above don’t work for you, here are the specs and features you’ll want to consider when shopping for a smart home water leak detector.

Hub requirements: Honeywell’s Lyric and D-Link’s sensor both operate on Wi-Fi, so you don’t need additional products to make them work. Other products, such as the Fibaro Flood Sensor and Insteon Water Leak Sensor, require a hub to connect to the internet and the apps on your phone.

Hub-based sensors, such as this Fibaro Flood Sensor, can be integrated into broader smart-home systems.

Connection protocols: If you own a hub already, you must make sure the sensor uses a compatible connection protocol. Fibaro, for instance, uses Z-Wave, which works with SmartThings and Wink hubs. Insteon sensors only work with Insteon hubs (one of which is compatible with Apple’s HomeKit technology). If you own a well-known hub such as Wink or SmartThings, you’ll likely see those names on the sensor’s box.

Integrations: Some hubs, such as Wink, SmartThings, and Insteon, allow you automate actions on other devices when a leak occurs. That way, you can trigger lights, turn on cameras, or sound an alarm. (Iris by Lowe’s supports this as well, but only with a $10-per-month subscription.) Wink, SmartThings, and D-Link also support IFTTT, a service that lets you automate tasks between connected devices and services. Sensors that communicate with water valves can turn off your main water supply to stop a leak.

Size and extendability: Where do you plan to put your leak sensor? If it’s a tight space, make sure the sensor is either small enough to fit, or that it offers a sensor cable to extend its reach.

Built-in siren: Unless you plan to put the sensor far from where you might normally hear it, it’s helpful to have a siren onboard. That way, you’ll still get alerted at home even when the internet is down.

Additional onboard sensors: Some leak sensors can also measure other environmental conditions that can lead to problems at their extremes, such as temperature (a frozen pipe can burst and cause catastrophic water damage) and humidity (excess moisture in the air can allow mold to grow).

Power source: Most leak sensors are battery powered, but some, such as D-Link’s Wi-Fi Water Sensor, depend on AC power. An outlet-powered sensor with battery backup in the event of a blackout would be ideal; unfortunately, they are rare.

Editor’s note: Mel Nussbaum, the owner of Water Works Plumbing in Overland Park, Kansas, emailed this useful tip for preventing water damage due to frozen pipes bursting: “If you shut off your main water service valve [you’ll] never have the issue, and two minutes of your time [will] cost you nothing. By the time you’re alerted and get someone to take action you still will incur huge damages.”

Updated July 15, 2020 to report that Jared Newman is no longer actively contributing to our coverage of water leak sensors. If you’d like to provide feedback on this story, please send an email to Letters@techhive.com. 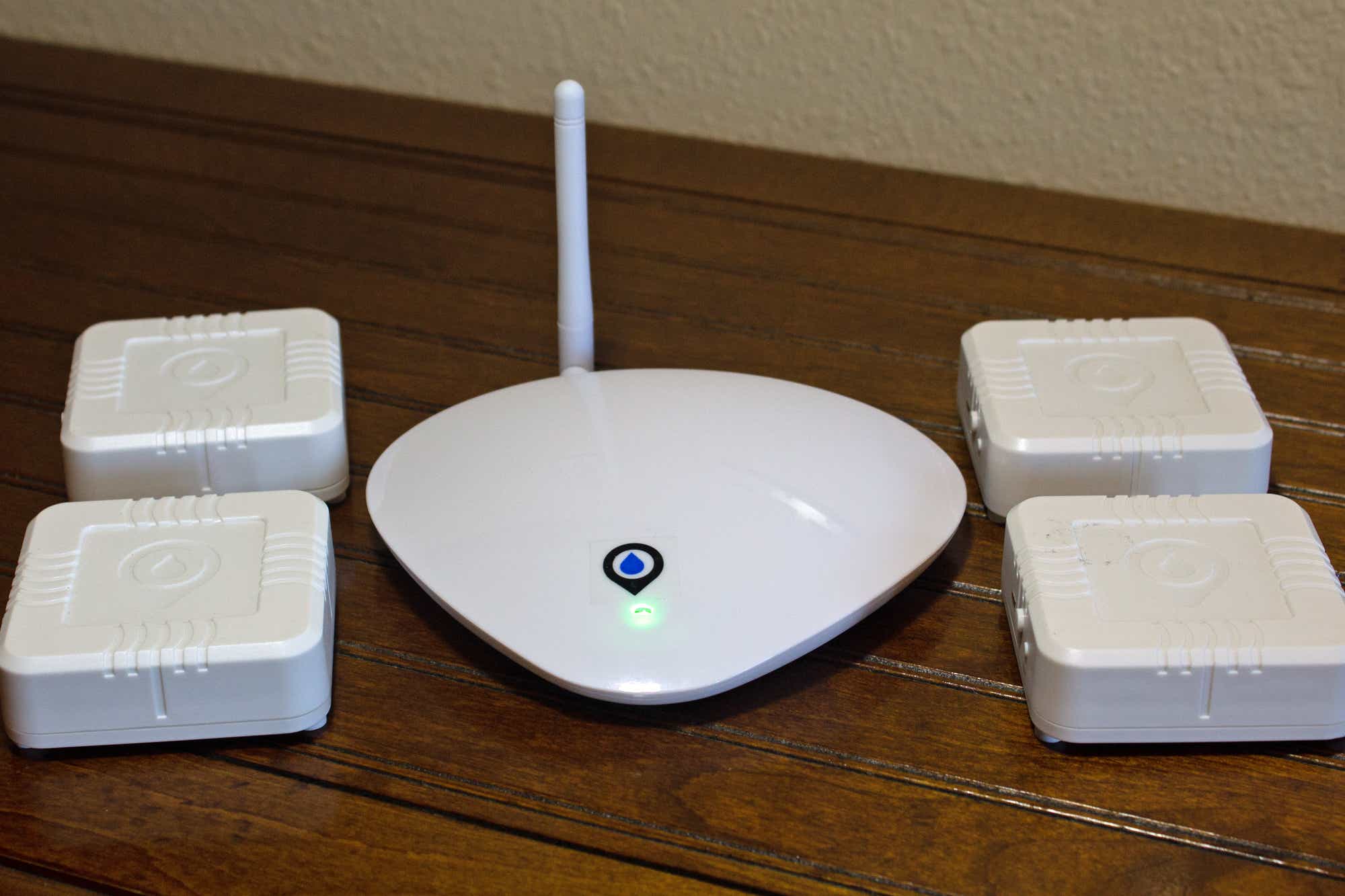