Beaucoup volume and bass with a clever, easy-to-use multi-function/volume dial on top. It also plays back from microSD cards and USB media.

Generally speaking, we’ve been impressed with the sound of Tronsmart’s audio products–the $70 Element T6 Plus reviewed here does nothing to change that. It even ups the company’s game when comes to volume and thump.

In terms of industrial design, on the other hand; well, let’s just say Apple hasn’t been losing any sleep.

That made pulling the Element T6 Plus out of the box a real treat–its look is generally on par with the pricier JBL’s and Bose’s of the world. The company still needs an eye-catching logo, but otherwise the aesthetics are bang on.

The Element T6 Plus employs the cylindrical body–this one measures 3.23 inches in diameter by 8-inches high–that’s common in the genre of mid-sized portable, weather-resistant speakers. It’s rated IPX6 for water resistance, meaning it can withstand a strong jet of water from a reasonable distance, but the manufacturer doesn’t make any claims as to dust resistance. (You can read all about IP codes and their meanings by clicking the preceding link.)

There’s the usual strip of controls down the center, but there’s also a large multi-function dial on top of the right-hand side. In addition to volume level, you can also use this this dial for play/pause control; to answer, end, or reject calls from a connected phone; and to summon your phone’s voice assistant. It’s a joy–you can slap down a marketing call in a heartbeat.

Alas, that makes going back to the padded side-mounted buttons for previous-/next-track, True Wireless Stereo mode (with a second speaker), EQ, input selection, and power a tad disappointing.

Another of the Element T6 Plus’s outstanding features is the ability to play music from a microSD card and USB stick (in addition to the usual 3.5mm analog and Bluetooth connections). Those ports are hidden under a captive rubber plug at the center of the control strip. As someone who likes to leave the phone at home or in the car, that’s a very nice feature–you can’t be the life of the party if you’re constantly picking songs.

Available in both red and black, the Element T6 Plus features two drivers (it’s stereo) and a large passive radiator (bass is heard as directionless) on the bottom/left side of the enclosure. 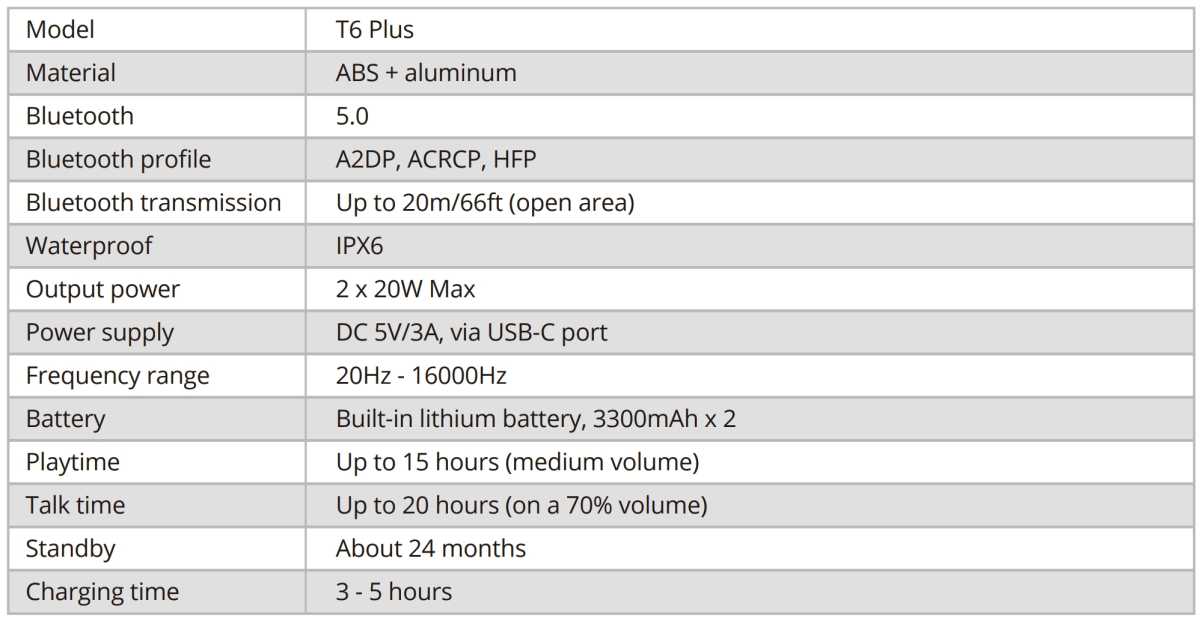 Sonically, the outstanding aspects of of the Element T6 Plus are the copious volume and bass it can pump out–it’s danceable for sure. The overall sound is middling in the grand scheme of things, but quite good for a weatherized portable Bluetooth speaker.

For the price you should have no complaints, and if you’re dancing at the beach with a bottle in your hand… Who cares? 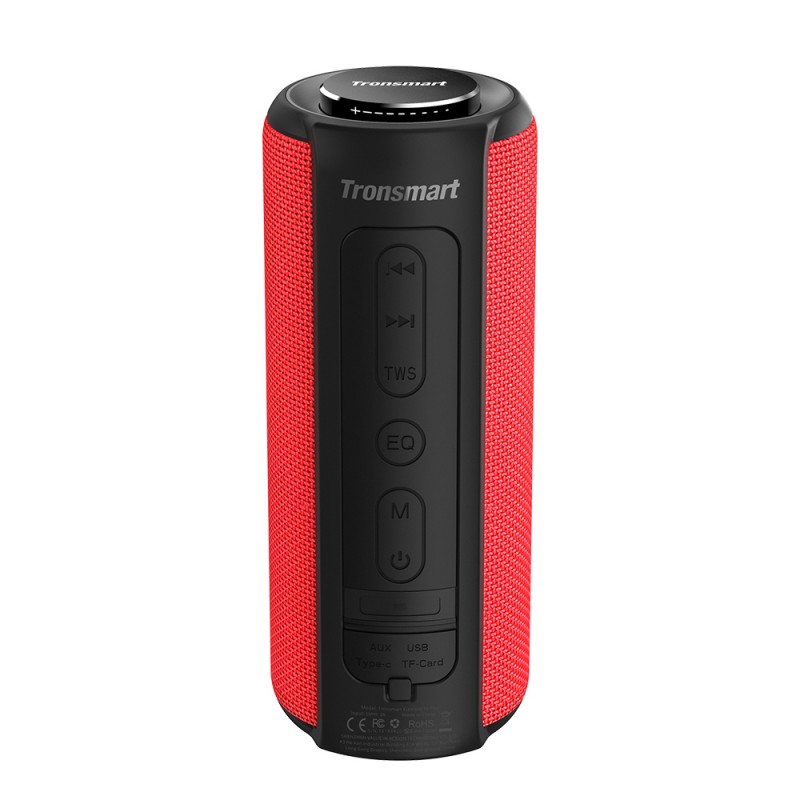 Some will find the red version of the Tronsmart Element T6 Plus more to their liking. And significantly easier to spot if you misplace it, especially in the wild.

The run time from the twin 3300 mAh batteries will, of course, vary with volume. Tronsmart claims 15 hours at medium volume, and 20 hours at about 70 percent volume. Perhaps, they actually meant 30 percent, or maximum rather than medium. I can only tell you that I was at about 6 hours with 65 percent battery left listening at a very modest volume.

The Element T6 Plus supports True Wireless Stereo (TWS); i.e., the ability to employ two of them as right and left speakers. I received only a single Element T6 Plus, so I couldn’t evaluate its performance on that score. Generally speaking, however TWS sounds far better than stereo on a single unit. Separation works wonders. Note that TWS is a Bluetooth feature, so it works only when the audio source is Bluetooth.

Good sound at a nice price

All in all, I found the Tronsmart Element T6 Plus roughly the equal of the pricier competition in terms of overall sound, and it’s superior in volume and bass reproduction.

And unlike with many of Tronsmart’s products, you won’t lose too many style points with your friends. Any you do lose, you’ll get back when the Element T6 Plus starts thumping.

adminhttps://technewstoday.club
Article précédentFlowers in The UK Are Blooming a Whole Month Earlier Than They Did in The 1980s
Article suivantNYT Hits Goal of 10 Million Subscriptions, Closes on The Athletic