Every surge-protector maker wants a gimmick and the Monster Vertex certainly has one: in addition to six AC plugs, it sports a detachable USB Type-A/USB-C charging satellite.

The engineers and marketers at Monster came up with a product in search of an audience—particularly at the price offered. The $100 Monster Power Center Vertex has a clever design and nice styling, but nothing it offers tots up to being worth a C-note.

The Vertex’s gimmick is a detachable USB charging hub. A 4-foot braided cable connects the power strip to the hub, which has only a magnetic mount and a single adhesive magnetic pad that cannot be reused. A warning in the manual advises the adhesive can become permanent. It lacks rubber feet for a desktop and has no other hanging options.

This review is part of TechHive’s coverage of the best surge protectors, where you’ll find reviews of the competition’s offerings, plus a buyer’s guide to the features you should consider when shopping for this type of product.

The hub has two USB-A ports and one for USB-C. Collectively, they can output up to 32 watts, which is “fast” enough to charge a tablet and two smartphones at nearly full speed simultaneously. The Type-A ports can output up to 12W between the two; the USB-C port up to 20W using standard voltage offerings. 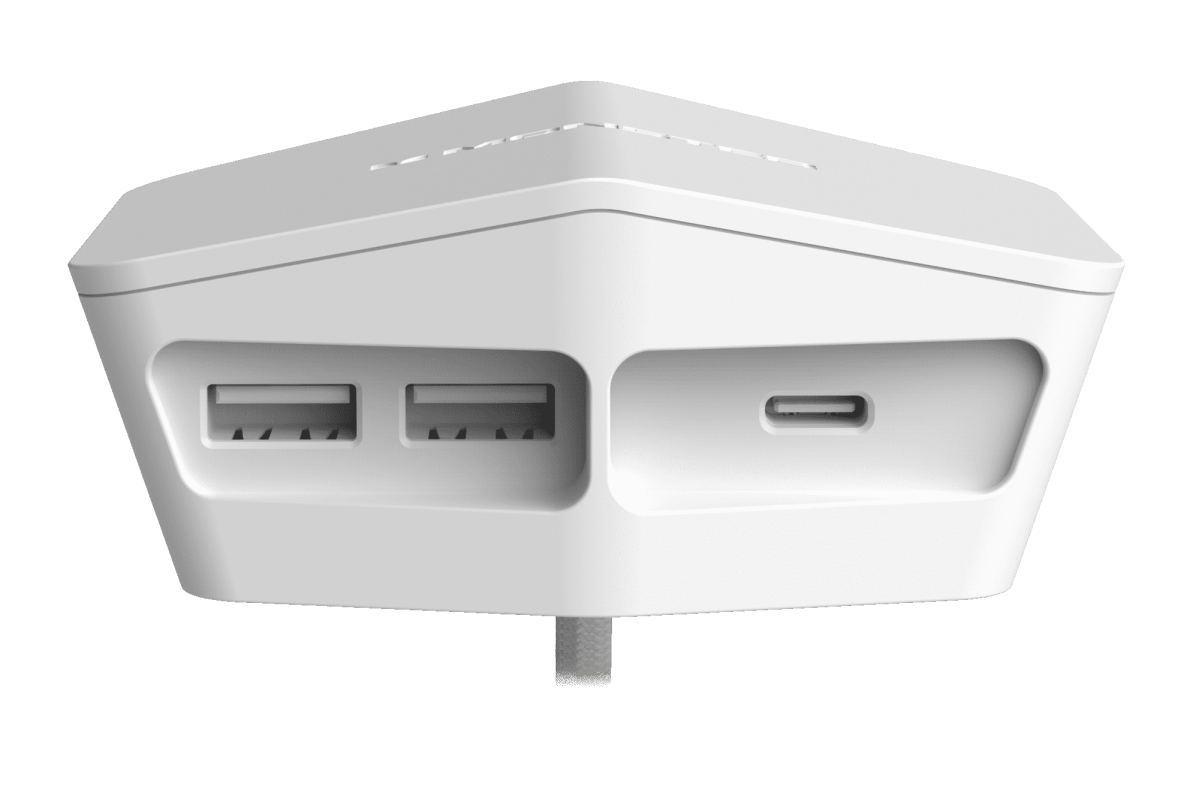 The Monster Vertex USB-charging module outputs up to 12 watts of power to its two USB-A charging ports, and up to 20 watts to its USB-C charging port.

The main body of the surge protector has six AC outlets in two sets of three oriented at 180 degrees from each other but not widely spaced. There’s a magnetic docking area for the USB charging hub. The hub’s cord can be neatly tucked out of the way.

But does the satellite power block make this surge protector worth paying several times more than what otherwise comparable models cost? The magnetic fixture assumes you might remove it for some reason or keep it there in reserve and pull it off to put on your desk. If so, you’re leaving some ugly adhesive strips on the wall. Why the docking section—does Monster expect you’ll move the plug around?

It’s hard to understand how it might be used besides sitting on one’s desk, in which case a separate, more versatile charging block plugged into an AC outlet on a power strip would fit the bill—and cost far less when combined with a surge protector with better specs. 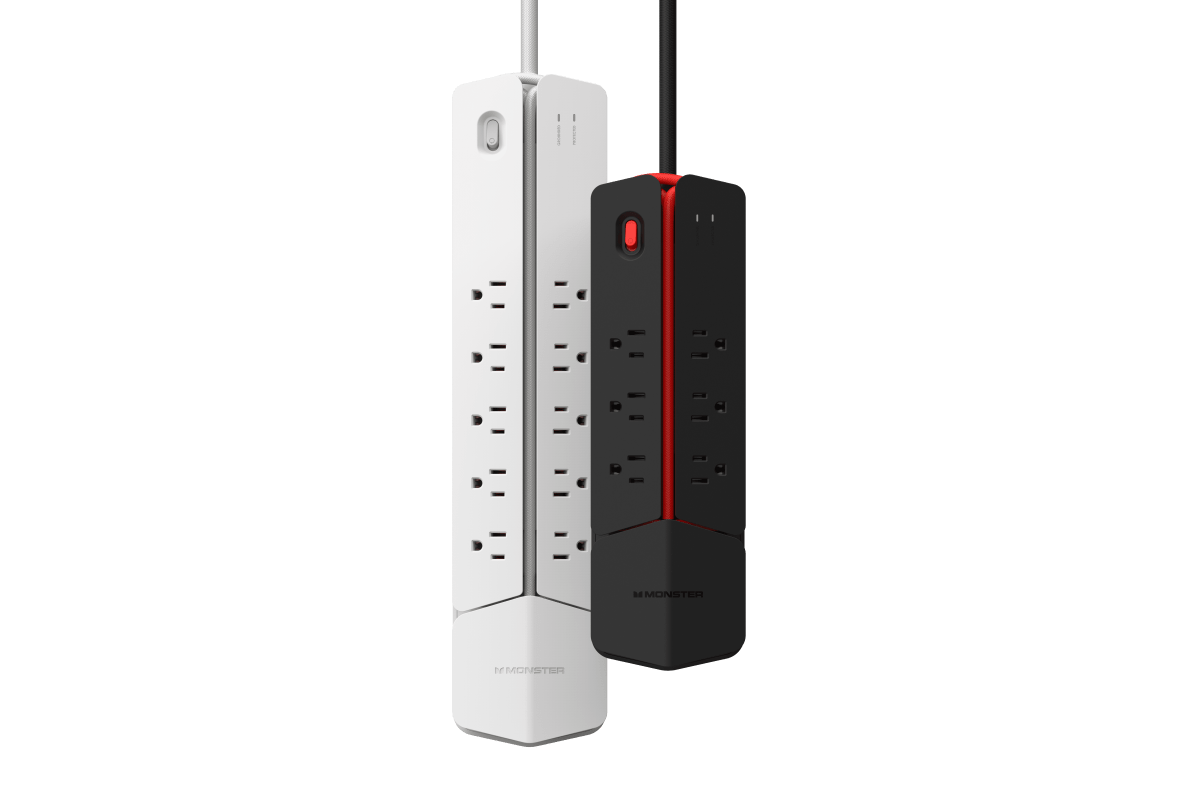 For $99.99, I would expect Monster would offer surge protection, power shut-off, and power control features at least as good as the $12.50 Philips Surge Protector Power Strip that’s the best simple power strip with surge protection we’ve seen. Instead, the Vertex falls short in nearly every regard.

Monster doesn’t mention a fuse or a reset option; its power switch appears to act just as an on/off button. The surge protection details can’t be found in the manual or on the website: you have to turn the Vertex over and read the fine print on its product label. At 1000V across all three segments of an AC circuit (line to ground, line to neutral, and neutral to ground), this is the highest—and, thus, least amount of protection—I’ve seen in any power-strip surge protector. (The Philips has 500V protection, but only across its line-neutral leg, the most likely point of failure.)

You can plug in up to 1875 watts across the six AC three-prong polarized outlets, however, which is typical. But that juice will flow whether or not protection remains in place. Your only indication will be that the white LED next to the almost illegible white-on-white debossed molded letters reading “Protected” on the strip is no longer illuminated. (The Vertex also has a white LED to indicate a properly grounded connection for the outlet into which it’s plugged.) 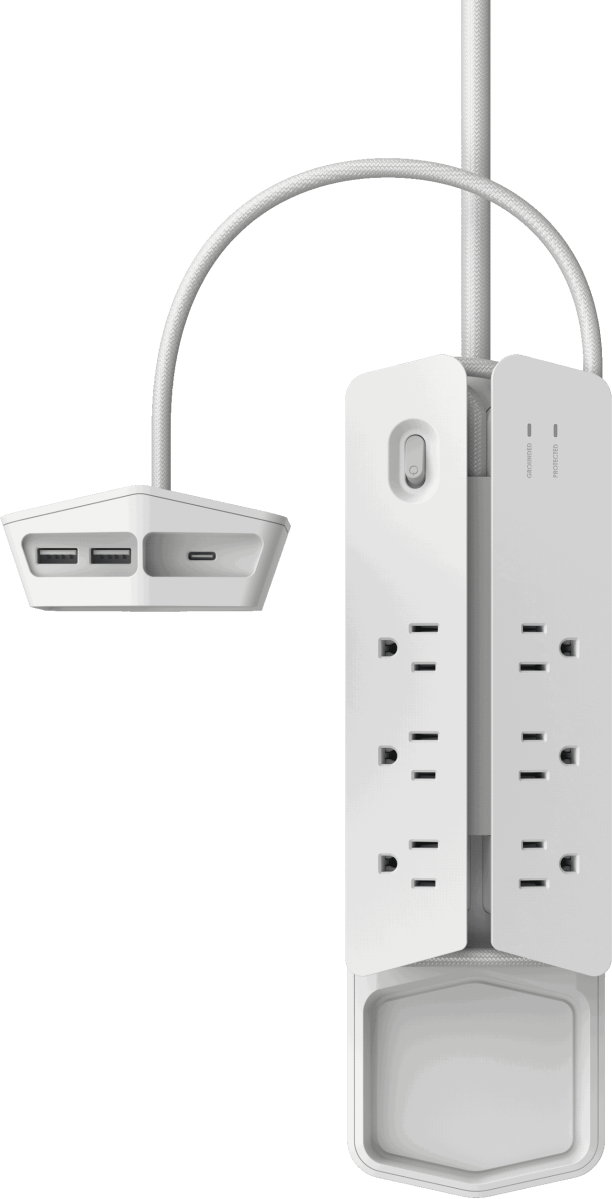 The Monster Vertex surge protector has two USB-A and one USB-C charging ports on a cable that extends from the primary outlet strip.

Monster does get praise for using braided cables for both the 6-foot AC cord and the 4-foot satellite USB charging hub. The AC cord has a low-profile 90-degree plug at the end, making it a cinch to plug in behind a desk or in other narrow spaces. The strip must sit on the floor or a desk, however; it has no mounting slots in the back.

The Vertex comes with a $200,000 warranty with a host of limitations, including requiring a report within 15 days of the incident, and the option to repair or replace with something comparable in addition to paying out cash. The included manual provides all the details, which is commendable.

Coming up with a gimmick is an old trick for stage performers and electronics manufacturers alike. But you must attach that gimmick to a purpose. At nearly $100, Monster doesn’t offer a reason to pay so much for so little, its charging hub aside.