Monoprice SB-600 review: This soundbar has too many drawbacks

While the Monoprice SB-600 has its merits and a reasonably affordable price tag, it has too many drawbacks–and too many superior competitors–to earn our recommendation.

Monoprice’s solid-looking SB-600 delivers fitting 5.1.2-channel performance, complete with Dolby Atmos height effects courtesy of upfiring drivers. But while this $450 soundbar (on sale for $340 as of this writing) has several points in its favor, including eARC support, multiple HDMI inputs, and easy setup, I also had some nagging complaints, including the bulky design, a stubbornly bright LCD display, and cables for the surround speakers that were too short. Speaking of the surround speakers, one of them failed during my testing, which is never a good sign.

Then there’s the SB-600’s audio performance, which is indeed solid but somewhat shy of thrilling, due to a decided lack of punchiness and dynamic range. Put another way, sequences that wowed on competing soundbars felt disappointingly subdued on the SB-600.

This review is part of TechHive’s coverage of the best soundbars. Click that link to read reviews of competing products, along with a buyer’s guide to the features you should consider when shopping.

While the Monoprice SB-600 has its merits and a reasonably affordable price tag, it has too many drawbacks–and too many superior competitors–to earn our recommendation. Instead, consider the similarly priced Vizio M512a-H6 , our Editors’ Choice for mid-range soundbars, or its runner-up, the second-gen Sonos Beam.

The Monoprice SB-600 is a 5.1.2-channel soundbar, which means it has drivers supplying audio to the left, center, right, left surround, and right surround channels (the “5” in the “5.1.2” designation), along with a wireless subwoofer for low-frequency effects (the “.1”) and two upfiring drivers for the height channels (the final “2”). Those upfiring drivers deliver Dolby Atmos height cues by bouncing sound off your ceiling, an easier and less expensive alternative to installing height drivers in your ceiling.

Measuring 40.6 x 4.3 x 3 inches (WxDxH), the Monoprice SB-600 is relatively large as far as soundbars go, with the main 8.8-pound soundbar cabinet extending almost the entire length of my 55-inch LG C9 OLED TV. At three inches tall, the SB-600 also blocked a sliver of the LG’s display when sitting in front of the set, although you can avoid that issue by mounting the soundbar beneath the TV–and yes, a full set of mounting supplies is included in the box.

The Monoprice SB-600 boasts three HDMI connectors; two of them are HDMI inputs, and the third is an HDMI output that also functions as an HDMI-ARC interface.

The Monoprice SB-600 boasts an HDMI-eARC interface and two HDMI inputs. Also included are optical and coaxial inputs, as well as a 3.5mm jack. Finally, a USB-A port can read MP3 files on an external drive.

While we’re on the topic of sound formats, it’s worth mentioning that the SB-600 lacks a DTS decoder, which means it can’t process a bitstream transmission with encoded DTS audio. That’s mainly an issue when it comes to watching Blu-ray discs with lossless DTS-HD Master Audio (the vast majority of streaming services deliver audio via Dolby Digital). An easy workaround is to offload the DTS decoding to your video source, which can then send the decoded DTS signal to the SB-600 as a PCM transmission. For example, on my Sony Blu-ray player, I set the “Audio Output” setting to “Auto” (which defaults to PCM output) rather than “Bitstream,” and all was well.

Because the SB-600 lacks Wi-Fi connectivity (typical of Dolby Atmos-enabled soundbars in this price range), setting up the soundbar is a relatively easy process, although I have bones to pick about the connector cables as well as a worrying hardware hiccup.

Once you either place the SB-600 in front of your TV or mount it under your TV, you then place the (relatively compact) wireless subwoofer in a convenient spot in the room, ideally somewhere behind the TV and not too close to a wall. Once you connect the soundbar and subwoofer to their respective power cords (so no, the subwoofer isn’t truly wireless) and power them on, the units should pair with each other automatically–or at least, they did for me. If the soundbar and subwoofer can’t connect to each other out of the box, there is a manual pairing process that should do the trick. 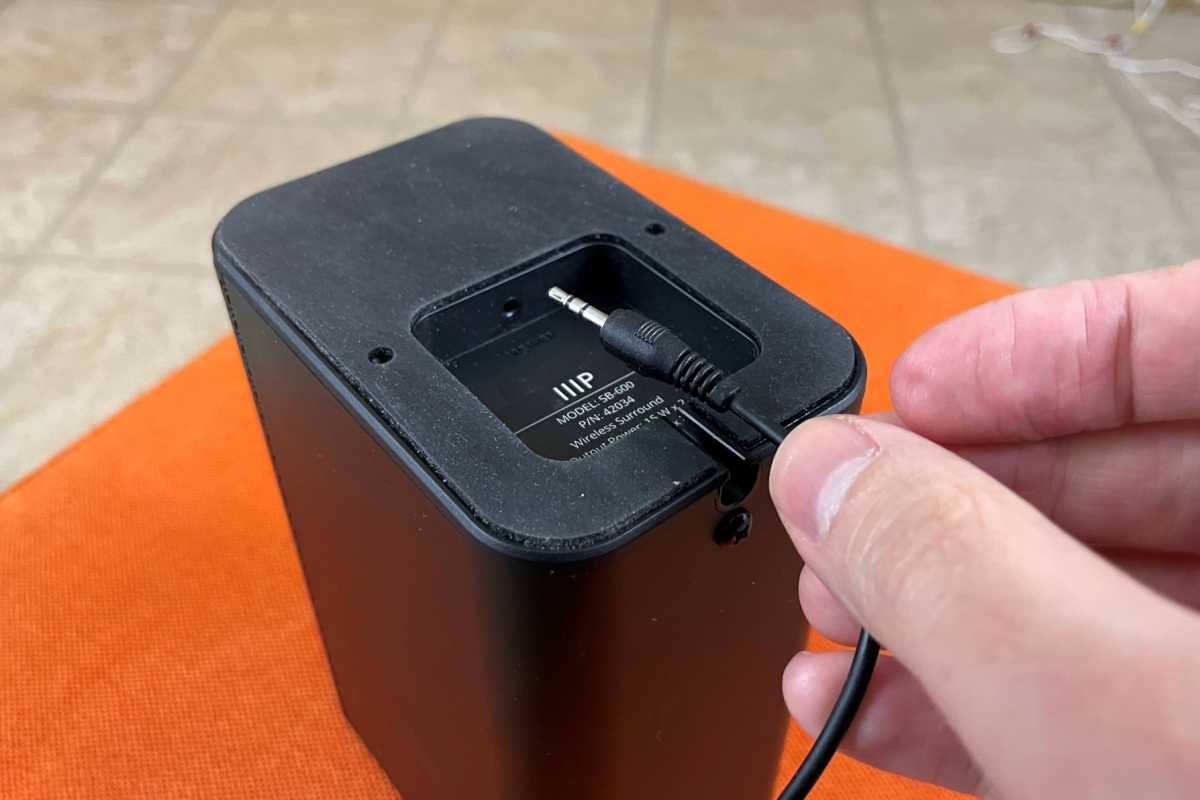 The Monoprice SB-600’s wireless surround speakers are connected by a 12-foot cable with 2.5mm jacks on either end.

While setting up the surround speakers sounds easy on paper, you may run into logistical issues with the cables. For starters, the 12-foot cable connecting the two surround speakers effectively limits how far they can be placed apart. Putting the speakers on my rear speaker stands, which are 10 feet apart, left the cable draped in plain view along the wall–not a good look.

Even worse, I noticed that the audio on the left surround speaker died after about a week of testing. I was never able to determine whether the speaker itself failed, or whether the 2.5mm plug had become loose or damaged. Monoprice eventually sent me a replacement unit and I had no further problems, but still, I’m concerned that the left surround speaker cut out so quickly, and without explanation.

The remote comes with a series of buttons laid out in a relatively intuitive fashion, with the most important controls–volume up, down, and mute–placed dead-center on a rocker. Flanking the main volume rocker are buttons for adjusting the bass and treble, while playback buttons for Bluetooth and USB audio sit directly above.

The top half of the remote has three thin horizontal rockers for switching inputs, with the prominent Power button at the very top. At the bottom of the remote is an EQ button for cycling through the four audio modes (I’ll get to them in a moment), along with two more horizontal rockers that control surround speaker volume, AV sync adjustments (in case an actor’s lips don’t sync up with their dialog). A final button at the bottom toggles the upfiring drivers on and off. 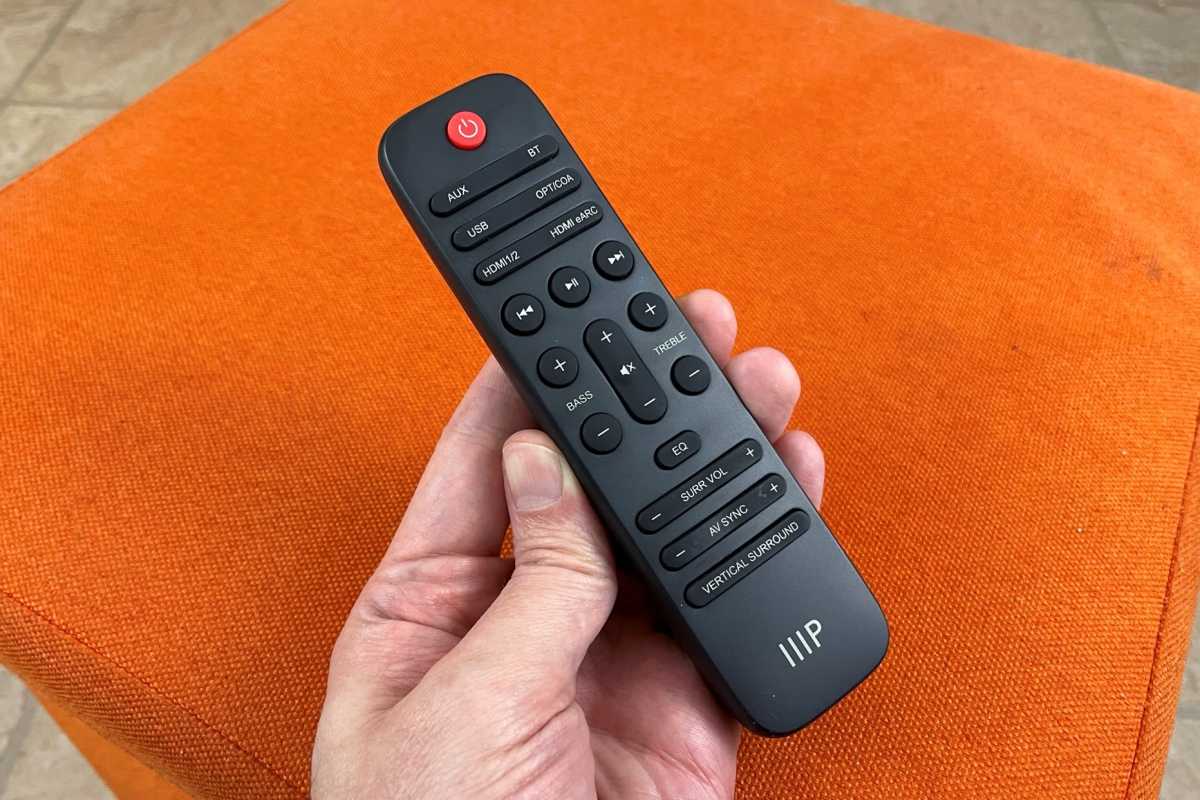 The buttons on the Monoprice SB-600’s remote are laid out in a relatively intuitive fashion.

One control that’s conspicuously missing is a dimmer for the front LED, which displays the current input, sound mode, and detected audio signal. When you’re watching a video or listening to tunes, the LED remains on, and I found it to be distractingly bright. The SB-600 is the first soundbar I’ve encountered with a full-on, non-dimmable LED display in front, and frankly, I didn’t like it one bit. A Monoprice rep said that the company may explore a dimmable LED for future soundbar models. 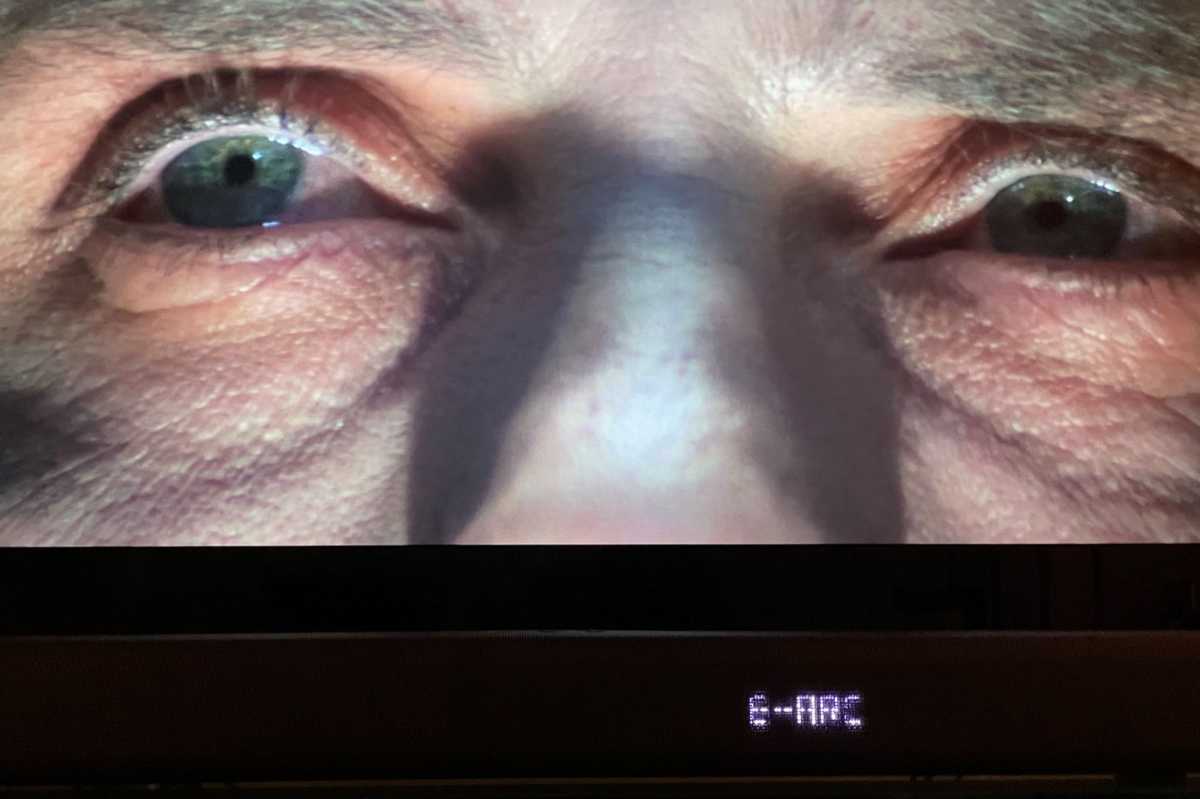 General Zod is none too happy about the Monoprice SB-600’s non-dimmable LED display.

The Monoprice SB-600 has four sound modes: Voice, Sports, Movie, and Music, a fairly standard set. For my listening tests, I stuck to Movie mode for movies and TV shows, while switching (surprise!) to Music mode for tunes. Voice and Sports modes are handy for boosting the sound of dialog. Notably, there’s no “night” mode that compresses the dynamics of the audio for late-night listening sessions when you don’t want to disturb housemates or neighbors.

Jumping to the chase, I was (more or less) satisfied with the SB-600’s audio performance without being particularly wowed by it. The soundbar’s audio signature is pretty much down the middle, delivering crispness and detail along with deep (bordering on boomy) bass. But the SB-600 occasionally seemed to pull back during moments of intense action, robbing the audio of excitement, while low frequencies sometimes lacked punch.

Starting off with my go-to, the UHD Blu-ray of Star Wars: The Empire Strikes Back, I could hear realistic-sounding showers of ice falling from above as Imperial stormtroopers raided the battered Rebel base on Hoth. Also impressive were the height cues for an Imperial Walker’s foot as it hung perilously over Luke’s head; ditto the overhead explosions after Luke tossed a grenade into the belly of the towering Walker. I also liked the crispness of John Williams’s frantic score, as well as the buzz of snowspeeders around and behind my head.

That said, the roar of the Millennium Falcon’s engines as it corkscrewed away from the pursuing Tie Fighters was a tad boomy (experimenting with subwoofer placement and dialing back the Bass setting helped tame the boom) and lacked punch, while the Tie Fighter’s laser bolts sounded curiously muffled. Overall, the sound felt a little muted and sometimes even dull, despite the clear surround and height effects.

Next up, I tried my UHD Blu-ray copy of Apollo 13, which has a DTS-HD Master Audio track with (for devices that can decode it) object-based DTS:X metadata on top. As I mentioned previously, the Monoprice SB-600 lacks an onboard DTS decoder, so I set my Blu-ray player to output multichannel PCM audio, which the SB-600 dutifully cranked out.

I liked the SB-600’s performance with Apollo 13 slightly better than I did on Empire, with the soundbar deftly handling James Horner’s rousing score while delivering the deep rumbles of the Saturn V rocket as it rose from the launch pad (this following my subwoofer tweaks, mind you). Again, the SB-600 lacked some of the excitement served up by competing soundbars (I’m thinking of the similarly priced Vizio M512a-H6) during this stirring sequence, but it still turned in a solid performance.

Turning next to 1978’s Superman on iTunes, the Atmos-enabled opening with its famously swooshing titles sounded muted on the SB-600, with the sharp “whoosh” of the credits considerably dialed back. John Williams’s iconic title track sounded suitably crisp, and there was a nice, deep thunk for Richard Donner’s “directed by” credit, but the overall effect sounded limp rather than thrilling.

For music, I started with Bruce Springsteen’s “The Ghost of Tom Joad,” streamed from Spotify via Bluetooth. Switching to Music mode, The Boss’s sparse vocals sounded clean and a little flat (not necessarily a bad thing), although the percussion was (again) a bit boomy; dialing down the bass yet again helped temper the low frequencies. Bertrand Chamayou’s rendition of Maurice Ravel’s solo piano works on the Erato label was clear and relatively detailed, if lacking in nuance (which could be chalked up to the lossy Bluetooth streaming). Meanwhile, the SB-600 nicely handled the throbbing baseline of Billie Eilish’s “Oxytocin” along with her breathy vocals.

The Monoprice SB-600 certainly has its good points. We’re always fans of multiple HDMI inputs (soundbars with a single HDMI-ARC interface are increasingly common), and the easy setup and voice mode both land in the plus column. But we’re put off by the short connector cables for the surround speakers, the faulty speaker that came with our initial review unit, as well as the too-bright LED display and the bulky design. Toss in the OK-but-not-thrilling sound, and we’re moving on to other contenders.