Capable of being affixed to a wall or simply draped over furniture, the flexible, 10-foot Govee RGBIC LED Neon Rope Light makes for a fun, eye-popping alternative to an LED light strip or string lights.

In the mood for a pop-up light show? Capable of being affixed to a wall or simply draped over furniture, the flexible, 10-foot Govee RGBIC LED Neon Rope Light makes for a fun, eye-popping alternative to an LED light strip or string lights.

The Wi-Fi-enabled Rope Light can glow in up to 15 different colors at once, and it boasts a dizzying array of animated color scenes, along with more than a dozen music-syncing modes. You can also put the light on a schedule, group it with other Govee lights, and control it with Alexa and Google Assistant voice commands. The durable rope light can even be used outside, although unlike an LED light strip, it can’t be cut to fit.

At $70, the Govee RGBIC LED Neon Rope Light isn’t cheap, but its sturdy build quality and rich feature set make it worth the expense.

The Govee RGBIC LED Neon Rope Light is quite unlike any typical LED light strip I’ve previously tested. Instead of a thin, delicate-looking strip with (generally speaking) a peel-and-stick design, the Govee rope light is thick, sturdy, and flexible. The “rope” itself is more of a tube that’s embedded in an opaque base with a flat backing, with roughly half of the glowing tube peeking out.

As for the actual lighting, the rope comes equipped with 252 LED “beads” in 15 addressable segments that can glow in up to 16 million colors. The “IC” in the rope’s “RGBIC” billing stands for “Independent Control,” which is Govee’s way of saying that the light rope can shine in multiple colors at the same time.

Govee hasn’t detailed the rope light’s brightness in terms of lumens, but based on my real-world experience, it doesn’t get nearly bright enough to light up a room or a workspace; we’re really only talking mood lighting here, so keep that in mind.

This review is part of TechHive’s coverage of the best smart lighting products, where you’ll find reviews of the competition’s offerings, plus a buyer’s guide to the features you should consider when shopping for this type of product.

Attached to one end of the 10-foot rope light is a short cable that connects to an in-line controller, which in turn plugs into a longer cable with a big, chunky wall wart. Taken together, the combined controller and power adapter cable are roughly eight feet long, giving you a fair amount of leeway in terms of connecting the rope light to a power outlet. 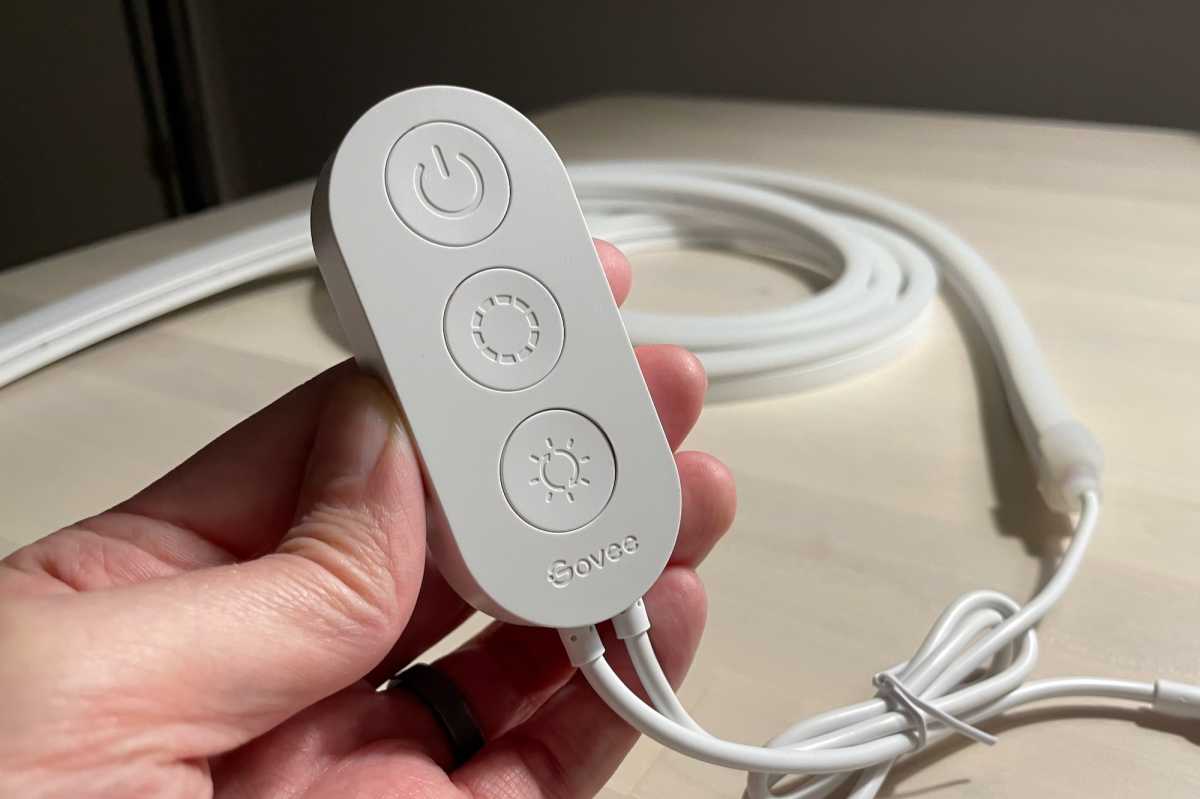 The Govee Rope Light comes with a three-button, in-line controller that lets you power the lights on and off, change its colors, and enable its music-syncing mode.

Govee says the LED Neon Rope light meets IP67 standards for complete protection from dust and water immersion up to a meter; that said, Govee warns against actually dunking the rope light in a bathtub. Instead, Govee notes simply that the light “can be used outdoors.” You can read all about IP codes at the preceding link.

The Govee RGBIC LED Rope Light gives you plenty of options when it comes to installation. For example, you could simply hang it from a hook or drape it over anything handy, ideal for adding a neon look to a pop-up party or concert.

If you’re looking for a more permanent installation, you can use the included metal brackets to affix the Govee LED Rope Light to a wall or another flat surface. The brackets fit snugly around the base of the rope light (indeed, it takes a fair amount of effect to slip them on), and they offer two mounting options: peel-and-stick or screw-on, with Govee supplying both screws and wall anchors in the box.

If you go the peel-and-stick way, you can use the included alcohol wipes to clean the mounting surface before sticking on the bracket. 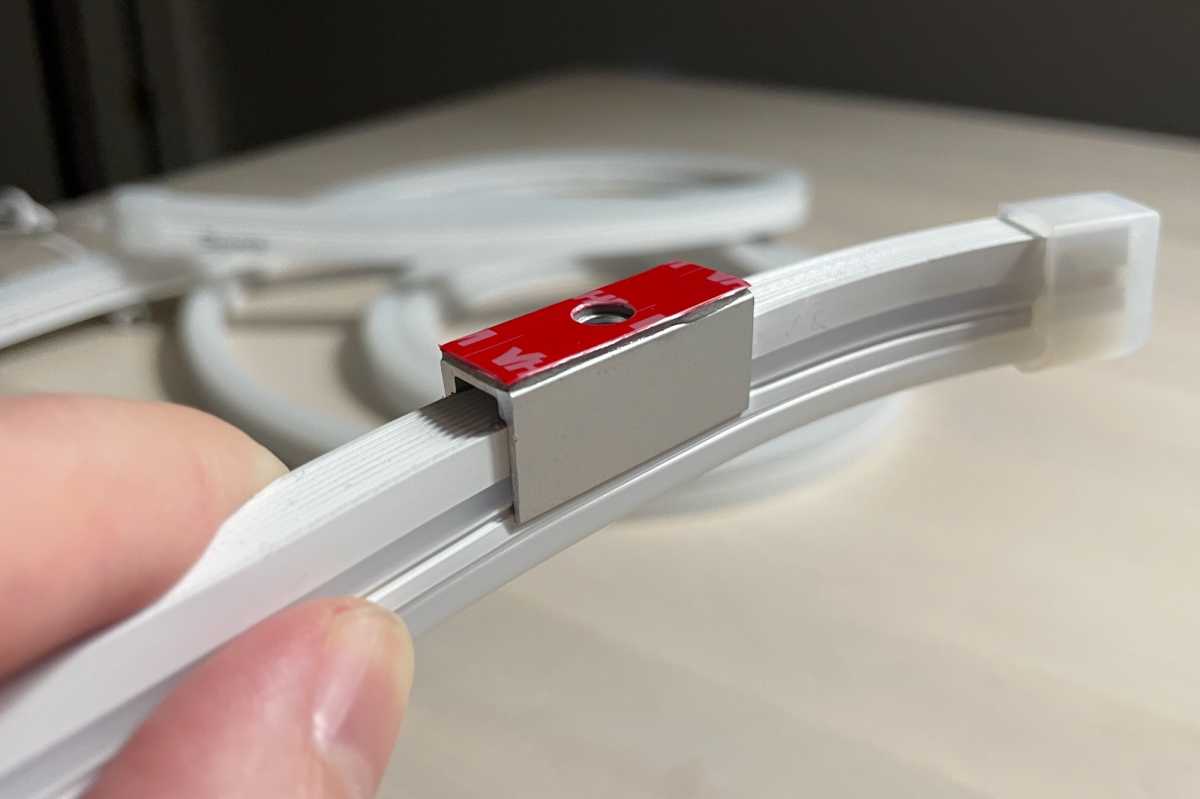 The included metal brackets have peel-and-stick adhesive as well as mounting holes.

It’s worth noting that unlike many traditional LED light strips, the Govee LED Rope Light cannot be cut to fit; doing so would permanently damage the rope light. You also can’t connect two of the light ropes together, although you can group them using the Govee Home app (as I’ll detail shortly).

Once you have the rope light where you want it, you can use the Govee app to connect it to Wi-Fi. Once you’ve logged into your Govee account (you’ll need to create one with your email address if you haven’t already), you’ll need to search for the correct product within the app (it’s too bad the app can’t simply detect nearby Govee products that are in pairing mode); once connected via Blueooth, the app steps you through the process of adding the rope light to your home Wi-Fi network.

Like most Wi-Fi smart lights, the Govee LED Rope Light only connects to 2.4GHz wireless networks, so if you have a dual-band router (which you almost certainly do), you might need to temporarily disable its 5GHz band to successfully connect the light.

The elaborately designed, somewhat busy Govee app boasts a dizzying number of options and settings; indeed, with all the nested tabs, buttons, and sliders, it took me a while to get my bearings.

On a basic level, the app lets you add your various Govee lights and smart devices to different rooms in your home, and you can also create groups of devices. Cleverly, Govee supports different types of groups that vary in functionality; for example, “Same model” groups give you deeper control over identical types of Govee lights, such as a pair of Govee Rope Lights, while “Schemes” allow you to group any Govee lights or switches for more general types of lighting controls. 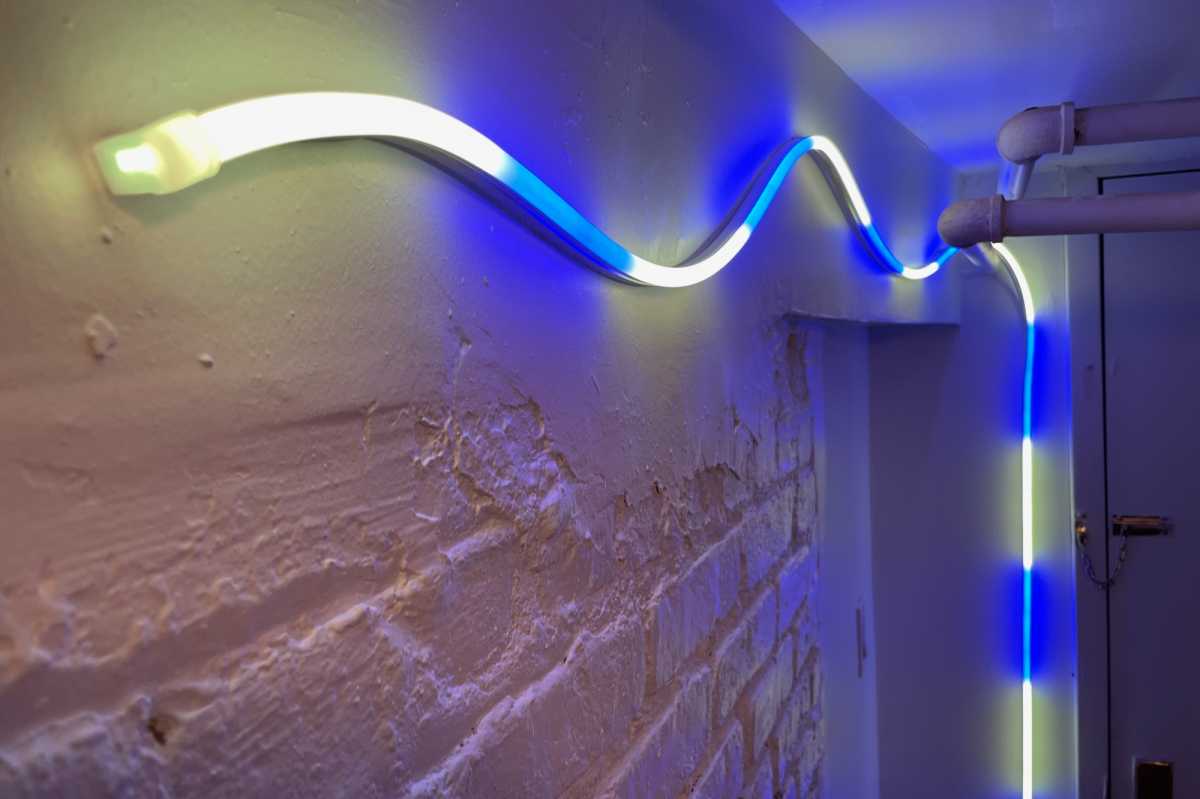 You can install the Govee Rope Light on a wall using the included mounting brackets, or simply drape it on a piece of furniture or hang it from a hook.

The four Govee Rope Light modes include Music, which makes the RGB lights flash and pulse in time to nearby music (the rope light’s controller has an integrated microphone, or you can use your phone’s built-in mic); Color, which lets you choose solid or gradient colors (a color wheel and swatches are available); Scene, which offers dozens of animated and multicolor lighting scenes; and DIY, which lets you create your own animations. There’s even an “Effects Lab” with such experimental features as animated light modes (including “Water Flow” and “Thunder Roaring”) that have accompanying sound effects that play through the app. Overall, the animated lighting effects are snazzy and impressive.

The Rope Light can be put on a timer (including wake-up/sleep timers) or put on a daily or weekly schedule from the Command tab. Schedules within the Govee app can trigger any custom color scenes or DIY modes that you’ve created, but while you can put the Rope Light on a daily schedule, there are no sunrise/sunset or vacation modes.

The Govee LED Rope Light works with both Alexa and Google Assistant, allowing you to control the light with voice commands or add it to Alexa or Assistant routines. Both voice assistants can control the light’s preset and animated color scenes and music modes, but they can’t trigger any of your custom color or DIY modes. That said, you can create sunset/sunrise routines for the rope light, filling in one of the functionality gaps in the Govee app. And while HomeKit isn’t supported, you can create Siri shortcuts for limited Siri voice control.

The Govee RGBIC LED Neon Rope Light isn’t the most utilitarian smart light we’ve tested, but it’s potentially the most fun. It’s easy to install—you don’t even have to bother with the mounting brackets if you don’t want to–and it’s packed with cool lighting features, including animated color scenes and music syncing, and you can put it on a schedule or control it with voice assistants. We’re sold.

Ben has been writing about technology and consumer electronics for more than 20 years. A PCWorld contributor since 2014, Ben joined TechHive in 2019, where he covers smart speakers, soundbars, and other smart and home-theater devices.

adminhttps://technewstoday.club
Article précédentOtta, a jobs platform with a database approach, raises $20M Series A from Tiger –
Article suivantWhy Some Animals Can Tell More From Less